Book Review and Giveaway: "The Smart One and the Pretty One" by Claire LaZebnik 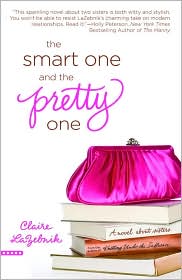 When Ava Nickerson was a child, her mother jokingly betrothed her to a friend's son, and the contract the parents made has stayed safely buried for years. Now that still-single Ava is closing in on thirty, no one even remembers she was once "engaged" to the Markowitz boy. But when their mother is diagnosed with cancer, Ava's prodigal little sister Lauren comes home to Los Angeles where she stumbles across the decades-old document.

Frustrated and embarrassed by Ava's constant lectures about financial responsibility (all because she's in a little debt. Okay, a lot of debt), Lauren decides to do some sisterly interfering of her own and tracks down her sister's childhood fiancé. When she finds him, the highly inappropriate, twice-divorced, but incredibly charming Russell Markowitz is all too happy to re-enter the Nickerson sisters' lives, and always-accountable Ava is forced to consider just how binding a contract really is ...

Reading this book brought to mind another pair of really close sisters: Jessica and Elizabeth Wakefield of Sweet Valley fame. Other than the fact that the Wakefields are twins and the Nickersons are not, the two sets of siblings share a lot of the same traits. Jessica and Lauren are similar in their attitude, way of life, and their ability to use their looks and popularity to get what they want. Meanwhile Elizabeth and Ava are the sensible, following rules, smarter and often seen as the "boring" sister. Throughout the book, I got the sense that Lauren wanted to live life to the fullest while Ava was content with how her life already had shaped itself. In between all the chick lit banter, a serious tone is taken with the girls' mother finding out she has cancer. While at the cancer center, Lauren meets a guy who's mother is in the final stages of cancer. The two strike up a relationship bonded by the disease which is heartbreaking due the depressing circumstances.

I wasn't too big a fan of Lauren's character. This was mainly because it seemed that she could get by in life with everything simply because she was pretty. Everyone, from her family to strangers, tends to give her free passes for whatever she does no matter how their true feelings really are. I felt that she was rather irresponsible and didn't really have a goal in life. The one scene that really bugged me was when she went into Ava's purse to make a donation with absolute no thought of repayment in the future. It annoyed me because Lauren seem to make it sound like that it was Ava's fault that she had money in her purse ready for her to take. Also Ava didn't really put up a fight which was irritating as well. I also wasn't too big a fan of Russell. He just didn't seem to me like he would be a good match for Ava.

Overall, this is a good chick lit book to read. There's some language and sex but neither detracts from the story. If you have a sister, you'll get the inside jokes and totally relate to the two women. The pair act like real sisters and give a sense of reality to the story. It also gives a unique aspect to finding a mate through your connections with your parents. This was my first book from the author and I'll be looking forward to reading more from her.

I'm giving away 5 brand new copies of today's book! Leave a comment with your email address so I can contact you if you win. I'll pick 5 names and announce the winners on Wednesday, October 14. Open to US and Canada entries. Good luck!