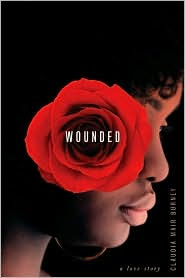 The last Saturday of every month will be devoted to the Faith'n'Fiction Round Table hosted by My Friend Amy. A book is picked that several bloggers will read and discuss over. This month we discussed Wounded by Claudia Mair Burney. Look for a full review from me in a few weeks. Below is one of the many discussions we had over the book, which had LOTS to discuss (if you click on the link for the round table you can see the many subjects we talked about)

Poor in health but rich in faith, Gina Merritt--a young, broke, African-American single mother--sits ina pew on Ash Wednesday and has a holy vision. When it fades, her palms are bleeding. Anthony Priest, the junkie sitting beside her, instinctively touches her when she cries out, but Gina flees in shock and pain.

A prize-winning journalist before drugs destroyed his career, Anthony is flooded with a sense of well-being and knows that he is cured of his addiction. Without understanding why, Anthony follows Gina home to find some answers.

Deborah: While I liked the book (and more about other things later), there was one thing that REALLY kinda bothered me.

The repeated use of the n-word. I understand what the author was trying to say. I know why she was using it. I know it's an ugly word and seeing it is supposed to evoke certain feelings. But honestly I felt very uncomfortable seeing it used repeatedly, several times on the same page in fact. This is also interesting especially since this is a book published by a Christian publisher.

Could the same effect have been produced with using n-----?
How did you feel seeing it?
Should that word be used in a book that is being promoted as Christian fiction, which does tend to be marketed to a slightly more conservative audience?

Ronnica: I think repeatedly using an emotionally charged word like n-word is a cheap way to get your point across. I think it's possible to get the same point across with more diversified language (I say the same thing for authors who repeatedly use curse words).


Carrie: The "n" word. That word makes me flinch every time I read or hear it - it causes a gut reaction that only the most vulgar of swear words can cause. I honestly do not think it would have changed the book or made it better or worse to not use that word - or at least not use it so often. I do think that it would be very off-putting for many readers of Christian fiction - especially if that is the only genre they read.
Sheila: Regarding the "n" word. I am trying to recall where it was coming from in the book. It seems like I remember Ronnie using it a lot when referring to Priest and in this instance it just added to the whole repulsive mixed up character that Ronnie was. The woman drove me insane on how she treated her son and how she used everyone around her and acted as though it all came from God. The author in this case I feel used the word to emphasize how out of touch, insensitive to anyone but herself, Ronnie was. I totally agree that it is an ugly horrible word and one of those trigger words that always stops my flow of reading whenever I see it.
Julie: I feel that I need to address the "n" word because everyone else has. I guess it didn't really stand out to me and I was only offended in that it is an ugly word. In my mind, no one should say it (like other crude words.) I do believe that the author used this word very deliberately and that it was definitely (albeit unfortunately) in character for Veronica. Maybe the author used this particular word to evoke strong feelings in her readers? I realized just how much I didn't like Veronica or trust her motives pretty early on in the story. I can't pinpoint the exact moment, but I'm betting her treatment of Priest (and maybe even her use of the "n" word) had something to do with it.
Hannah: On the topic on the N word: Yes, it's a horrible, gut-wrenching word. As bad of a word as it is, though, its use does reveal something about the characters who are using it. Could we have been shown this another way? Maybe. But I believe fiction doesn't need to be sanitized to be Christian.
Thomas: When I came across the n word for the first time, I was shocked. However, it made sense after I had finished the book. I wonder if the author was not an African American whether the publisher would have allowed the use of the n word.

Participants in this month's round table included