Showing posts from October, 2008
Show all

How Harry Cast His Spell by John Granger

It is time to play a Wild Card ! Every now and then, a book that I have chosen to read is going to pop up as a FIRST Wild Card Tour . Get dealt into the game! (Just click the button!) Wild Card Tours feature an author and his/her book's FIRST chapter! You never know when I might play a wild card on you! Here is a special Wild Card for Halloween! The author is: John Granger and the book: How Harry Cast His Spell: the Meaning Behind the Mania for J.K. Rowling’s Bestselling Books SaltRiver (August 4, 2008) ABOUT THE AUTHOR: John Granger is an author, speaker, and popular guest on talk shows and interview programs. A graduate of the University of Chicago, where he studied classical languages and literature, he uses Harry Potter to teach English literature online at HogwartsProfessor.com. He is a frequent speaker at academic and fan conferences, and has been interviewed as a “Harry Potter expert” in the Wall Street Journal, the New York Times, and the DVD of Harry Potter and the Or
Post a Comment
Read more

An Irishwoman's Tale by Patti Lacy

This week, the Christian Fiction Blog Alliance is introducing An Irishwomans' Tale Kregel Publications (July 8, 2008) by Patti Lacy ABOUT THE AUTHOR: Patti Lacy graduated from Baylor University in 1977 with a B.S. in education. She taught at Heartland Community College in Normal, Illinois, until she retired in 2006 to pursue writing full time. She has two grown children with her husband, Alan, and lives in Illinois. ABOUT THE BOOK Far away from her Irish home, Mary Freeman begins to adapt to life in Midwest America, but family turmoil and her own haunting memories threaten to ruin her future. A shattered cup. Cheap tea. Bitter voices asking what's to be done with the "little eejit." Mary, an impetuous Irishwoman, won't face the haunting memories--until her daughter's crisis propels her back to County Clare. There, in a rocky cliffside home, Mary learns from former neighbors why God tore her from Ireland forty-five years earlier. As she
1 comment
Read more

This week, the Christian Fiction Blog Alliance is introducing Dangerous Heart Avon Inspire (October 14, 2008) by Tracey Bateman ABOUT THE AUTHOR: Tracey Bateman published her first novel in 2000 and has been busy ever since. There are two other books in the Westward Hearts Series, Defiant Heart (#1) and Distant Heart (#2) She learned to write by writing, and improved by listening to critique partners and editors. She has sold over 30 books in six years. She became a member of American Christian Fiction Writers in the early months of its inception in 2000 and served as president for a year. Tracey loves Sci-fi, Lifetime movies, and Days of Our Lives (this is out of a 21 year habit of watching, rather than enjoyment of current storylines. She has been married to her husband Rusty for 18 years, has four kids, and lives in Lebanon, Missouri. ABOUT THE BOOK For the past seven years, Ginger Freeman has had one goal: find Grant Kelley and make him pay for allowing her brother to die. Growin
Post a Comment
Read more

How Would Jesus Vote? by D. James Kennedy and Jerry Newcombe 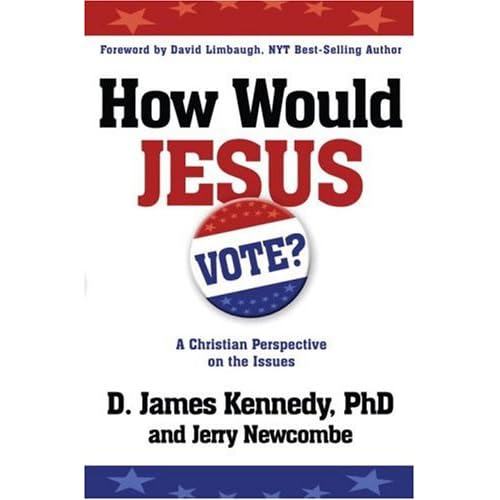 The 2008 election is shaping up to be one of the most important political contests in American history. In fact, Dr. D. James Kennedy believes it will be a watershed moment that could impact our very survival as a nation under God. Values voters—people whose political views and votes are based on their faith in God—are being targeted as never before. As the campaign season moves forward, the significant players will debate terrorism, radical Islam, nuclear threats, global warming, social issues, gay marriage, immigration, education, health care, and many other essential issues that can create sharp ideological divisions. Into this overwhelmingly complex political situation, Dr. Kennedy and Jerry Newcombe bring a clear, compelling, and nonpartisan exploration of what God’s Word has to say on these critical matters. How Would Jesus Vote? isn’t intended to tell readers which candidates to support; rather it offers a Christ-centered understanding of the world to help readers draw the
Post a Comment
Read more

It is time to play a Wild Card ! Every now and then, a book that I have chosen to read is going to pop up as a FIRST Wild Card Tour . Get dealt into the game! (Just click the button!) Wild Card Tours feature an author and his/her book's FIRST chapter! You never know when I might play a wild card on you! Today's Wild Card author is: Marcia Gruver and the book: Diamond Duo Barbour Publishing, Inc (October 1, 2008) ABOUT THE AUTHOR: Marcia Gruver is a full time writer who hails from Southeast Texas. Inordinately enamored by the past, Marcia delights in writing historical fiction. Her deep south-central roots lend a Southern-comfortable style and a touch of humor to her writing. Awarded a three book contract by Barbour Publishing for full-length historical fiction, Marcia is busy these days pounding on the keyboard and watching the deadline clock. Diamond Duo, the first installment in the trilogy entitled Texas Fortunes, is scheduled for release in October 2008. Marcia won thir
Post a Comment
Read more

Book Review: "The Fall of Candy Corn" by Debbie Viguie

It is time to play a Wild Card ! Every now and then, a book that I have chosen to read is going to pop up as a FIRST Wild Card Tour . Get dealt into the game! (Just click the button!) Wild Card Tours feature an author and his/her book's FIRST chapter! You never know when I might play a wild card on you! Today's Wild Card author is: Debbie Viguié and the book: The Fall of Candy Corn Zondervan (October 1, 2008) ABOUT THE AUTHOR: Debbie Viguié has been writing for most of her life. She has experimented with poetry and nonfiction, but her true passion lies in writing novels. She obtained her Bachelor of Arts degree in Creative Writing from UC Davis. While at Davis she met her husband, Scott, at auditions for a play. It was love at first sight. Debbie and Scott now live on the island of Kauai. When Debbie is not writing and Scott has time off they love to indulge their passion for theme parks. The Sweet Seasons Novels : The Summer of Cotton Candy The Fall
Post a Comment
Read more
More posts