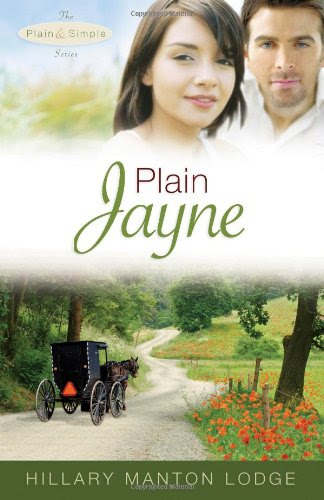 Jayne Tate loves her life as it is-living in a big city, working as a reporter for a fast-paced newspaper, and dating a guy who knows nothing about her past. When her father passes away though, she's forced to take another look at what she wants out of life. After losing out on the big career opportunity she was hoping, for she decides to escape to Oregon Amish country, seeking solace and maybe a big story.

Even in this land of buggies and bonnets, Jayne finds life more complicated than she expected. Can she persuade herself that her growing friendship with the mysterious and handsome Levi Burkholder is just about research? And what's a latte-drinking, laptop-using, motorcycle-riding reporter to do when this new life starts to change her?

Why can't all Amish fiction be like this? I had a blast reading this book by this talented debut author. Everything that I don't like in Amish fiction never showed up at all. Lodge describes her books as "urban Amish, totally not your mom's Amish". I totally agree with her. While older Amish readers might still enjoy this new series, I think that these books will appeal more to the 20-30 something crowd. At the very least I really felt as if this book was speaking to me.

Jayne is a very interesting character as she visits the Amish to find new life to her career. She's curious about the lifestyle but not in a mocking way. She tries her best to fit in but still takes advantage of the modern life she lives. She's a real spunky character and gets along well with everyone. Romantic relationships are a big part of her story but the way they are played out in the book is very realistic and enjoyable to read. I really liked her relationship with the Burkholder family and how both sides gained new found respect for each other.

What I liked best about this book was the blending of the outside world and the Amish world. This book however does what most Amish book don't do, which is allows the reader to make the choice about which world they want to be part of. Too many times, the Amish are portrayed as a Utopian society where their way of living is how everyone should be living and those who don't are made to feel guilty. Jayne questions many things about the Amish to their face, but without disrespect. She's genuinely curious but not to the point where she wants to switch lifestyles. One question she asked, which I felt was very important, was why can the Amish forgive everyone who does harm (both physical or psychological) but refuses to forgive people who leave the lifestyle. It's a question I've been asking for years.

I was really enthralled by this book and couldn't put it down. The writing is fresh and crisp, totally modern without resorting to random pop culture trivia. Maybe it's because the author is younger than most Amish authors, but like I said I really felt like I could relate to this book. I am around the same age as Jayne and she acted just like how I felt someone my age would act. This is probably one of my favorite new reads of this year and I know I'm going to be excited for when the next book in the series comes out. Even if you don't like Amish fiction, you should still give these books a try. They're definitely not what you think they are going to be. HIGHLY recommended.