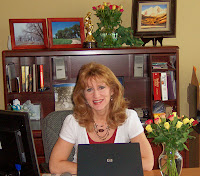 Her books have received acclaim from Library Journal, True West Magazine and Historical Novels Review, and Rekindled debuted on the CBA fiction bestseller list. She has a professional background in business management and conference coordination. A leader of women's ministries for over twelve years, she is currently active in music ministry, facilitating small groups, and mentoring other women. A graduate of Harding University, Tamera lives with her husband and their two teenagers in Greeley, Colorado.

To celebrate the release of Remembered, as well as the 3-volume boxed set of Fountain Creek Chronicles (Rekindled, Revealed, and Remembered), Tamera is currently giving away boxed sets in a contest on her website. Check out the contest at http://www.tameraalexander.com/ .

From a Distance, the first book in Tamera’s next historical series (Timber Ridge Reflections) releases in spring 2008.

Though loss is often marked
in a single moment,
letting go of someone you love
can take a lifetime...
The threat of war--and a final request--send Véronique Girard from France to a distant and uninviting country. In the Colorado Territory, she searches for the man who has held her heart since childhood--her father. Pierre Girard left Paris for the Americas to seek his fortune in fur trading, vowing to send for his wife and daughter. But twenty-five years have passed and his vow remains unfulfilled. Sifting through shards of broken promises, Véronique embarks on a dangerous search for a man she scarcely remembers.

His grief finally healed, Jack Brennan is moving on with life. After years of guiding families west, he is now working as a freighter to the mining towns surrounding Willow Springs. What he doesn't count on is an unexpected traveling companion on his trips up into the mountains, and how one woman's search will cause havoc with his plans... and his life.

"Alexander again delivers a most amazing story. The characters are more than words on the page; they become real people. Though there are French words sprinkled throughout the story, they enhance the emotions rather than distract the reader." --Romantic Times

"...a rich historical romance by possibly the best new writer in this subgenre." --Library Journal

"Alexander has done it again with Remembered, third in the FOUNTAIN CREEK CHRONICLES. She's fashioned characters that are as rich and deep as the mountains and valleys they explore throughout the pages, coloring the story as adeptly as the heroine does her canvas. I was drawn immediately into the ages-old heartaches of both of the main characters, understanding at once Veronique's reticence to make a place for herself in the unknown wilds of America and Jack's uncompromising love for this land that he’s cut a swath through time and again. They both have a series of mountains to overcome in the search for Veronique’s father, but I enjoyed watching their faith and appreciation grow with each turn of the page. And woven adeptly through it all is the encompassing truth of the Lord's sovereignty—that sometimes He takes away, and sometimes He gives us what we need, not what we're looking for.

Anyone's who's read the other Fountain Creek books won't want to miss this one, but it easily stands alone. The characters will take you by the hand and lead you heart-first into their stories, and by the time they release you at the end, you'll feel as though you've taken up residence just across the Creek from them, as surely as they have in your heart." --Roseanna White, christianreviewofbooks.com

"Remembered, the third book in the FOUNTAIN CREEK CHRONICLES, takes us back to Willow Creek and revisits beloved characters from the previous two books in the series, Rekindled and Revealed. Tamera Alexander has the remarkable ability to create places, and characters who endear themselves to us, even those just briefly mentioned. If I had lived in the late 1800s, I would love to have met these people and would surely have been inspired by the way they lived out their faith.
Remembered is a delightful read, well-researched and well-written. I expect to see great things from this author in the future." --Lindsey Freitas, bookloons.com