Guardian of the Veil by Dr. Gregory Spencer and BOOK GIVEAWAY! 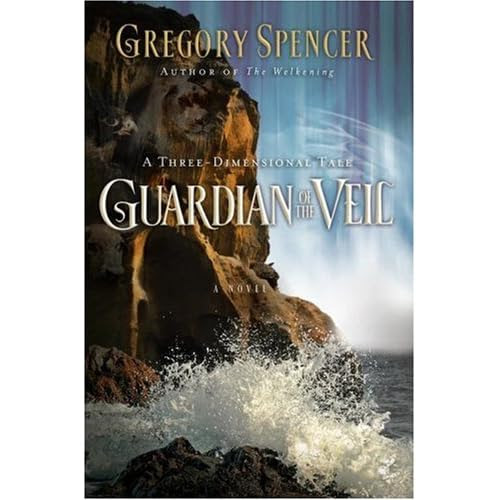 I'm giving away a brand new copy of today's book! Leave a comment with your email address so I can contact you if you win. I'll pick a name and announce the winner on Thursday, September 27. Good luck!

In Guardian of the Veil, the long-awaited sequel to The Welkening, Dr. Gregory Spencer has created an alternate reality that is at once fantastic and hauntingly familiar, framed in a cataclysmic conflict between Good and Evil.

Four misfits of Weyerhauser High—Angie, Lizbeth, Len, and Bennu—are each blessed, or cursed, with unique characteristics. Angie has an ethereal quality about her; Lizbeth is physically plain but athletic; Len is impetuous and strong-willed; Bennu takes off on flights of poetic fancy. These gifts count for little in their small town. But when the foursome is drawn into the parallel world of Welken, they become the keys to save that world from the jaws of Morphane, the soul-eater.

The veil between the worlds is thinning, and once again the misfits are called to defend their adopted homeland against seemingly insurmountable odds. They must rescue their entrapped friends with the very fabric of existence at stake. This incredible adventure forces the friends to face their own weaknesses, nightmares, and pain—or lose it all trying.

Dr. Gregory Spencer is professor of communication studies at in . He specializes in rhetorical theory and criticism, religious rhetoric, and media ethics. Dr. Spencer's teaching has been noted for its creativity. According to one former student, " His words do not merely paint pictures, they provide eyes to see the pictures that have always been before us. In this sense, his classroom is no less than a portal into a transformed world." Guardian of the Veil is his second novel.

Q. What genre does Guardian of the Veil fit into, and who is your target reading audience?

A. Guardian of the Veil is fantasy. I think of the book as reaching Young Adult and Adult readers, perhaps those who enjoyed Harry Potter but are looking for something a little more layered, more complex.

Q. Where did you birth the idea for this book? When? How did it come about?

A. As a sequel to The Welkening, Guardian found its “first birth” in the history of that book, from when I told stories to my three girls, mainly on vacation. These children’s tales, about a detective cat named Percival P. Perkins, and his basset hound sidekick, Bone Malone, morphed into a larger, richer tale about four high school friends who visit the . In Guardian, these friends discover that the veil into Welken is thin, allowing them to return and help Piers find Bors. The idea came from my own observations about the fragility of life, about various “thin veils” we experience, such as between health and sickness, sanity and mental illness, dreams and waking, depression and happiness, good moral choices and bad ones.

Q. If your book was turned into a movie, who would play the main characters?

A. A tough question, since the main characters are in high school.

Q. Which character do you most relate to, and why?

A. As many authors would say, all characters come from some part of me—or, as my mentor said, “The deeper I go inside of me, the closer I get to you.” One human soul has more in common with all human souls than we often recognize. Even so, I am closest to Len and Lizbeth. Until mid-high school, I was short like Len. I would like to say I USED TO be impatient like him, but that malady is too much still with me. I am prone to self-pity, like Lizbeth, and my parents were alcoholics when I was an adolescent.

Q. What takeaway points do you hope the reader pulls from this book?

A. A revelation to me was how the multiple stories in the book came together around the theme of forgiveness. If I had to reduce the “takeaway point” to one line, I would say “Because the veils are thin (between health and sickness, good and bad choices, etc.), we ought to be ready to give grace, especially the grace of forgiveness.

Q. What book are you reading now?

A. Grace (Eventually) by Ann Lamott, Crime and Punishment by Feodor Dostoyevsky, What Really Matters by Arthur Kleinman, and Rich Jewel of Christian Contentment by Jeremiah Burroughs.

Q. Do you pre-plan character development and then let them run with the story, or do you plot the story in advance?

A. A little bit of both. I get some ideas ahead of time, and have a sort of broad outline for certain sections—but mostly I invent as I go along, often surprising myself with connections made to earlier events. In Guardian, the key motivation in Welken is to “find Bors,” the missing friend of Piers. I had no idea where he was even after 300 pages. My wife kept saying, “You mean you STILL don’t know where Bors is?”

Q. How do you deal with your other obligations (family, church, etc.) when it’s crunch time near deadlines?

A. I published my first novel at age 51, probably because I couldn’t find a way to meet my other obligations and also write fiction. As a professor, I had “obligations” to work at other kinds of writing. When my girls were pretty much out of the house—and I had been promoted to full professor—I gave myself permission to pursue fiction. For the most part, I wrote Guardian in two summers.

Q. Do you have an organized office and set times to write, or do you find yourself writing at unusual times or places?

A. I do most of my writing in the morning. I work from about 8:00 to lunch or so, and rarely keep writing into the afternoon. I may edit in the afternoon, or do art work, but usually not first drafts. I do all of my first drafts in longhand on yellow pads. If I am not sitting on my porch with my cat by my side and my dog at my feet, I am some place where I have a view: at the beach or a park. I can’t imagine writing a first draft by staring at a screen.

Q. What else would you like your readers to know about you, or about the book?

A. Hmm. I like high quality dark chocolate. In large quantities. And gift certificates to local restaurants, like Piatti and Stella Mare. And Jeannine’s cakes are amazing, especially coconut.