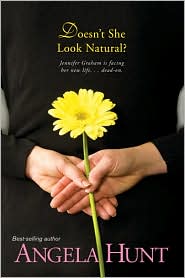 Imagine sharing your house with dead bodies below you

Jennifer Graham was working as an aid for one of the top senators in the country. But her life is soon changed when her husband divorces her and she has to take custody of their two sons and move in with her mother. Funds are getting low without the support from her ex-husband. Just when Jennifer's about to give up, she learns that she's the recipient of the most unusual inheritance. A distant relative has left her the Fairlawn Funeral Home in small town Florida. Jennifer uproots her family from the big city to go see what she can salvage from this deal. Once they get to their new destination, they soon learn how their lives will be changed forever.

This was one of the most interesting concepts I had heard for a book. A story set in a funeral home? Two things came to mind: "My Girl" and every horror movie about dead people. Luckily this book was more the former than the latter. Jennifer was definitely more braver than I ever would be about living in a funeral home. Not that I have anything against the dead, but sharing my living space with them is not an ideal situation. I also love the cover for this book. It's very unique and really catches your eye. I think it's a book that you can't help but notice on the shelf because of the cover. It looks whimsical and chick lit-like but the story is more intense and serious. Many Christian novels do not portray those who are divorced in a positive light. It seems that the thinking of "forgive and forget" is still prevalent in a lot of people. Never mind that people were unfaithful or abusive, wives especially seem to be shown as being the one at fault. So it was refreshing in this story to see that the main character is divorced but not because she wants it. The novel is also written uniquely: both in first person from Jennifer's POV and from the other character's viewpoints as well. That way you could see things from everyone's perspective. The ending of this story is very shocking and really affects the reader as well as the characters. The characters are very memorable, each with their own quirks that will captivate the reader. This story is typical Angela Hunt: wonderfully written, a unique storyline and a message that will have an effect on you long after you finish the book. I am looking forward to reading the next book in the series. Until then, I shall continue to ponder over what I learned from this book. Highly recommended.

Doesn't She Look Natural? by Angela Hunt is published by Tyndale (2007)