Book Review: "A Shadow of Treason" by Tricia Goyer 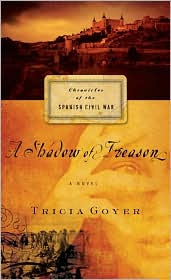 Sophie discovers that nothing is as she first imagined. When Walt, the reporter who helped her over the border, shows up again after Guernica is bombed, Sophie is given an impossible mission. She must leave behind the man she's fallen in love with and return to the person who betrayed her. Another layer of the war in Spain is revealed as Sophie is drawn into the international espionage schemes that could turn the tide of the war and help protect the soldiers from the International Brigade ... she must find a way to get a critical piece of information to Walt in time

Once again I was transported back into history with another book by Tricia Goyer. I love the research that was done for this novel. It is obvious that the author actually went out and did her homework when writing this book. I hate historical fiction novels that just write about events that everyone knows about. Tricia Goyer's books, however, focus on historical events that the average person does not really know. For example, if you asked the average person about the Spanish Civil War, they would probably have no idea what you are talking about. By reading her books you actually learn while enjoying a great story. I wish her books could have part of my college curriculum because I've learned a lot from her writing for my own history classes. There's a lot that goes on in this book as several different characters are given time to tell their story. It's a little confusing at first in the beginning because I was trying to remember who everyone was. But once I got past that, I really liked how everyone's story all connected somehow. I really liked Sophie's story especially when she finds out the truth about what really happened with Michael and what she has to do after that. I especially love stories about characters having to play spies and double agents. Finishing this book was satisfying and I totally enjoyed it. I'm highly anticipating the third book in the series to find out what happens to everyone. If you love historical fiction, you NEED to get this book.

Tricia Goyer has published over 300 articles for national publications such as Today's Christian Woman, Guideposts for Kids, and Focus on the Family, and is the co-author of Meal Time Moments (Focus on the Family). She has led numerous Bible Studies, and her study notes appear in the Women of Faith Study Bible (Zondervan).

Tricia and her husband John live with their three children in Kalispell, . Tricia's grandmother also lives with them, and Tricia volunteers mentoring teen moms and leading children's church. Although Tricia doesn't live on a farm, she can hit one with a rock by standing on her back porch and giving it a good throw.

Q and A with Tricia!

Q: A Shadow of Treason follows A Valley of Betrayal. This is the first time you've written books as a series instead of stand alone. Which way do you like better?

A: I love writing in series. It was great to continue with the same characters. In my stand-alone books I fell in love with these people and then I had to say good-bye after one book. It was wonderful to be able to continue on.

Q: In A Shadow of Treason Sophie must return to the person who betrayed her in an effort to help the Spanish people. It makes the book hard to put down because the reader has to know how Sophie's heart will deal with it. Why did you decide to make this an element of the book?

A: There are very few of us who go through life without giving away a part of our hearts to someone who didn't deserve it. Even though Sophie had the best intentions, she gave away her heart and she was hurt-not only that she must revisit those emotions.

I wanted to include this element-to delve into the topic that emotions are sometimes as big of a trap as any physical cage. Emotions are real and they guide us -- even when we don't want to admit it. Poor Sophie, not only does she have to deal with a war around her -- she also has to deal with a war within herself. It's something I've battled, and mostly likely others have too.

Q: There is an interesting element that arises in this book and that is Spanish gold. I know you can't tell us what happens in this book, but can you give us a brief history of this gold?

A: Sure. When I was researching I came upon something interesting. The Spaniards, as we know, had taken much Aztec and Inca gold during the time of the conquistadors. Well, at the start of The Spanish Civil War much of this gold was still held in . In fact had the fourth largest gold reserves in the world at that time. The Republican government was afraid Franco would take the city and the gold. They had to get it out of and this included transporting priceless artifacts. The element of gold does make its way into my story. It was great to include this little-known (and true!) element into my story.

Q: Another historical fact I learned about was the Nazi involvement during this time. Not only were the Germans active in , but they had spy networks busy around the world. How did you find out about this?

A: I love reading tons of research books. Usually I find one little element that I dig out and turn into a plot line. This is what happened with my plot-line for the Nazi pilot, Ritter. I dug up this bit of research of Nazi involvement in -- and the -- because a lot of people aren't aware of the Nazi involvement prior to WWII. The truth is they were busy at work getting the land, information, and resources they needed far before they threatened the nations around them. The Germans knew what they wanted and how to get it. And most of the time they succeeded!

Q: A Shadow of Treason is Book Two. When will Book Three be out? Can you give us a hint of how the story continues?

A: Book Three is A Whisper of Freedom. It will be out February 2008. The characters that we love are all still in the midst of danger at the end of Book Two. Book Three continues their stories as we follow their journeys in -- and (for a few) out -- of . It's an exciting conclusion to the series!

Q: Wow, so we have a least one more fiction book to look forward to in the near future. Are you working on any non-fiction?

A: Yes, I have two non-fiction books that will be out the early part of 2008. Generation NeXt Marriage is a marriage book for today's couples. It talks about our marriage role models, our struggles, and what we're doing right as a generation. It also gives advice for holding it together.

I've also been privileged to work on the teen edition of Max Lucado's book 3:16. It was a great project to work on. What an honor!