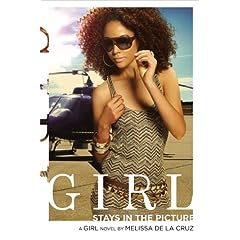 If you can't be a mega teen superstar sensation then maybe you'll be lucky enough to join her entourage.

Devon -- one name only, please -- is the latest and jail-bait-est pop star to hit number one on the Billboard chart, and she's making her big-screen debut in Juicy. But after her stint in rehab, the studio isn't so sure she's their girl anymore. If they cut any more of her lines, she'll be a silent film actress! Can Devon regain her star status? She needs to watch her back and make sure that flash doesn't catch her causing a scene, and we don't mean the kind you can yell "Cut!" after.

Livia has lost the weight and gained the attitude in the Hollywood party scene. Her dad's an Oscar-winning producer, and with a hot Beverly Hills boyfriend on her arm as well as her photos all over the pages of Gosizzle.com, Livia looks like she has a perfect life. But looks can be perfectly deceiving....

And there's fresh-faced Casey, who left a job bagging groceries at the Piggly Wiggly to play personal assistant to her best friend...and Devon's rival. She's got the biggest crush on the biggest star of the film -- a hot Brit known for loving and leaving. Will Casey stay true to herself while trying to find a place in his universe?

Stars. They're just like us. But what does that mean for the rest of us? Stay tuned, people.

I was a huge fan of The Au Pairs series, so I was excited to hear that Melissa De La Cruz had a new series out that involved an older cast (non Vampires). This book takes the reader through Hollywood life through 3 different girls - the superstar, the assistant and the family heir. What I enjoyed most was that Devon, Livia and Casey are actually nice people. Yes they enjoy the benefits of having famous connections, being beautiful, and having tons of money to spend as they want. However they have consciences and for the most part think about how their actions affect others before they do something. I thought it was interesting to see the makings of a movie, how different directors and producers can totally change the course of a movie. A leading role can be reduced to cutting room floor material and completely alter the entire storyline. Livia's struggle with gastric bypass surgery is a topic not normally read about in teen books. Casey's life as an assistant to her former best friend is another interesting twist as well. It's quite interesting how the other two, who had been friends for years, immediately accepted her into their group.

To be honest though, I preferred the Secrets of My Hollywood Life series by Jen Calonita over this book. While this book was great at showing the insider's view of Hollywood and a different take from the assistant's point of view, I didn't feel that it was as approachable as the Secrets books. You never really get to know the characters. Casey is VERY naive which at times comes across very unrealistic. I know she's a newbie to the celebrity life but the small town girl facade got annoying after awhile. I was also rather disappointed that the 3 main characters didn't really bond together very much. They proclaim to be great friends but exactly HOW they become friends isn't very developed and they're only together for less than 50 pages at the most.

Still though I enjoyed reading this book. There's hardly any harsh language or cursing at all. Sex is at a minimum. Drug use is non existent and drinking is mentioned but not in binge drinking quantities. Thus it's a refreshing change to read a young adult book about glamorous lifestyle and not include the hard core party scene. The end of the story ends on a cliffhanger, leaving me to look forward to reading the next book. Overall, while not on the same level as The Au Pairs series, still an enjoyable read.