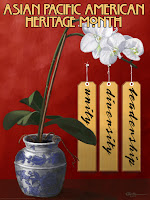 Today I'm focusing on Asian Americans politics. There have been quite a number of Asian Americans in politics over the last half century. The numbers are growing which is great.

Note: I'm not endorsing anyone on this list. I'm just showcasing Asian Americans in politics. Norman Yoshio Mineta is a United States politician of the Democratic Party. Mineta most recently served in the Presidential Cabinet of George W. Bush as the United States Secretary of Transportation, the only Democratic Cabinet Secretary in the Republican George W. Bush Administration. On June 23, 2006, Mineta announced his resignation after more than five years as Secretary of Transportation, effective July 7, 2006, making him the longest-serving Transportation Secretary in the Department's history. In 1971 he was elected the 59th Mayor of San Jose, becoming the first Asian American mayor of a major U.S. city. He was appointed in 2000 by President Clinton as the United States Secretary of Commerce, making him the first Asian American to hold a post in the presidential cabinet.

Patsy Mink was an American politician from the U.S. state of Hawaii. Mink was a Japanese American and member of the Democratic Party. She also was the Assistant Secretary of State for Oceans and International Environmental and Scientific Affairs.

Mink served in the U.S. House of Representatives for a total of 12 terms, representing Hawaii's second congressional district. While in Congress she was noted for authoring the Title IX Amendment of the Higher Education Act. Mink won her last election after her death in 2002.

In recognition of her contributions towards equal rights in the country, Congress named the Title IX Amendment of the Higher Education Act the "Patsy T. Mink Equal Opportunity in Education Act".

Eric Ken Shinseki (born November 28, 1942) is a retired United States Army four-star general who is currently serving as the 7th United States Secretary of Veterans Affairs. Secretary Shinseki served as Army, from 1999 to June 11, 2003, and retired from active duty on August 1, 2003. During his tenure, he initiated the Army Transformation Campaign to address both the emerging strategic challenges of the early 21st century and the need for cultural and technological change in the United States Army.

Steven Chu, Ph.D is an American physicist and currently the 12th United States Secretary of Energy. As a scientist, Chu is known for his research in cooling and trapping of atoms with laser light, which won him the Nobel Prize in Physics in 1997. At the time of his appointment as Energy Secretary, he was a professor of physics and molecular and cellular biology at the University of California, Berkeley and the director of the Lawrence Berkeley National Laboratory, where his research was concerned primarily with the study of biological systems at the single molecule level. He is a vocal advocate for more research into alternative energy and nuclear power, arguing that a shift away from fossil fuels is essential to combat global warming Gary Locke is an American politician. He is the current United States Secretary of Commerce and was the 21st Governor of Washington, serving from 1997 to 2005. Locke was the first, and remains the only, Chinese American to serve as governor of a state in United States history

Daniel Inouye is an American politician who currently serves as the senior United States Senator from Hawaii. He has been a U.S. Senator since 1963, and is currently the third-most-senior member after fellow Democrats Robert Byrd and Ted Kennedy. He has continuously represented Hawaii in the U.S. Congress since it achieved statehood in 1959, serving as Hawaii's first U.S. Representative and later a U.S. Senator. Inouye was the first Japanese-American to serve in the U.S. House of Representatives and later the first in the U.S. Senate. He is the third oldest U.S. Senator after Robert Byrd and Frank Lautenberg. He is also a recipient of the Medal of Honor. Elaine Chao served as the 24th United States Secretary of Labor in the Cabinet of President George W. Bush from 2001 to 2009. She was the first Chinese American and the first Asian American woman to be appointed to a President's cabinet in American history. Chao was the only cabinet member to serve under George W. Bush for his entire administration

Bobby Jindal is the Governor of the U.S. state of Louisiana.A Republican, before his election as governor, he was member of the United States House of Representatives from Louisiana's 1st congressional district, to which he was elected in 2004 to succeed now U.S. Senator David Vitter. Jindal was re-elected to the House in the 2006 election with 88 percent of the vote. He was the second ever Indian American elected to Congress. On October 20, 2007, Jindal was elected governor of Louisiana, winning a four-way race with 54.2% of the vote. At age 36, Jindal became the youngest current governor in the United States. He also became the first non-white to serve as governor of Louisiana since P. B. S. Pinchback during Reconstruction; one of fewer than ten people not of mainly European ancestry elected governor of a state after Reconstruction; and the first Indian-American governor in U.S. history
Asian American Heritage Month 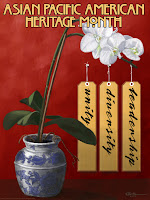 --------------Contest Closed---------------- I am going to focusing on something special this month. As we all know February is Black History Month. But did you know that Ma y is Asian Pacific American Heritage Month? What's that? You didn't know? Well now you do. And you're going to learn more about it because I'm going to focus about this subject throughout the month of May. Why? Because many people don't know that May is set aside for APAH, we certainly NEVER learned about it in school. I'm hoping to make this a yearly event, but we'll see how this one turns out. I'll be posting reviews of books by Asian American authors or featuring Asian American characters, reviews of movies directed or starring Asian Americans, have posts by guest bloggers, historical posts, sp otlights of famous Asian Americans in politics, business, sports, entertainment, literature, etc. and posts sharing my own personal thoughts about what i t's been like for me as an
Read more