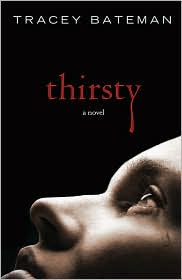 "Hello, I'm Nina Parker.and I'm an alcoholic." For Nina, even in recovery, the truth of the declaration has demolished her hopes and condemned her to return to the town she ran away from nearly two decades earlier-Abbey Hills, Missouri. But the place she once called home is no safe haven. A ritualistic-style murder.

Animals disappearing from the Ozark reserve where Nina works, and turning up slaughtered. And someone-or some thing-watching Nina. Wanting her. Stalking her with a 250-year-old desire that burns like a raging wildfire.

Nina's ex-husband Hunt shows up, hoping to protect Nina and Megan, the angry teenage daughter who followed her to Missouri. But another man has entered the picture, testing Nina as she attempts to walk the tightrope of recovery-and the power of thirst. Much more than Nina Parker's love hangs in the balance. The battle between love and obsession is destined to unfold to its startling, unforgettable end.

I have enjoyed Tracey's books in the past so I knew that I was going to enjoy the story. I was a bit worried though at how the vampire story was going to come into play. Would the vampires be real vampires or would they be vampire-like characters with addictive tendencies? Would they be Dracula type vampires or Twilight style vampires? Would this be a fantasy world or a realistic setting? There were many questions running through my head when I picked up the book.

After putting down the book, my thought was that Tracey had done an extremely excellent job. The story skillfully blends a story about alcohol addiction and the dependency on the drink and what it does to a person's life. It shows how the yearning for one last drop can ruin a person's life forever and cause great damage to the relationships with people they love. Thus this is the same as what it's like for a vampire and the thirst for blood. Nina's alcohol addiction parallels Markus's vampire tendencies and the two tend to circle around each other like vultures. Markus is a real vampire who is out for blood and there's nothing fake at all about him. The place where the story takes places gives off a creepy feeling. I kept picturing lots of fog everywhere. It's a good place to set the story in. I was happy with the ending of the story, there is no "vampire conversion" scene thankfully.

If there's any problems I had with the book, it's the switching in narration without warning. The story goes from Nina's first person past recollections like a diary, then switches to third person telling the current story and then goes to Hunt's first person recollections. The problem lies in that it's never told that it's Hunt's talking in first person, it abruptly changed and it took me a while to figure out who was doing the talking. Plus while, Nina's first person is written in italicized font, there's no change in Hunt's and looks like it's part of the regular story. It was just confusing to read at times.

Overall I really enjoyed this book. Vampires have never been a part of Christian fiction before. Mostly likely past authors had no idea how to use them or felt them to be so evil, that they didn't want them in their stories. This book does nothing to make a vampire seem good or Christian like so really it's just a story about good vs. evil. There's just more story in between to make a statement. I feel like both fans of Twilight and other vampire lit would enjoy this book as well as fans of Christian fiction. It is NOT a light read however. It's quite intense so I don't know if I would immediately pass this one right off to teens without reading it first. HIGHLY recommended.

Thirsty by Tracey Bateman is published by Waterbrook (2009)