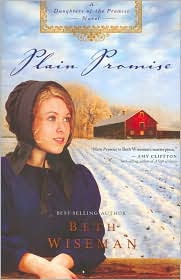 Sadie Fisher wonders if she'll ever find true love again after the death of her husband. When wealthy Englischer Kade Saunders rents her guest cottage for a month, Sadie's world is turned upside-down.

Kade has a five-year old autistic son who is unexpectedly left in his permanent care. As Sadie's feelings for the child grow, so do her feelings for Kade. But is this man suitable for anything more than friendship?

One would think that after a while all Amish stories start to blend together. While that may be the case, the trick is to write a good and unique story to make it stand apart. I think that's what Beth Wiseman has done with her books, because so far I've really enjoyed all of them. Sadie is unique because not only is she a widow, she rents out her cottage (that has electricity!) to an Englisch single man, and she's writing letters to another Amish guy in another state. That's quite a bit of excitement for people who are supposed to be living simple lives.

I really thought it was interesting to bring a topic like autism into the Amish world and see how they would react to it. Sadie doesn't really know what exactly is going on (I guess no one in the Amish gets it?) but she does her best to try to comfort Tyler whenever he starts getting antsy. The Bible verse speaking is a bit freaky but it adds to the story very well. To be honest, from the brief interaction we had with her and the way Kade described her, I was not a fan of Tyler's mother and actually quite glad as to what happened to her. I know that sounds terribly sadistic but the way she handled the situation was done very poorly and she should have thought of the consequences better.

I did feel that this book did go into the over dramatic side at times with everything that happened in the book. Also the ending was a bit predictable, as I knew exactly what Kade was going to do as soon as I started reading. I think for once it would be interesting to have one spouse remain Amish and the other to stay non-Amish but I guess that would make things too difficult. Overall though, I did like the book. I enjoy this author's style of writing as it is comforting and she does a good job of bringing the characters to life. I'll be looking forward to when the fourth book in the series comes out next year.

Plain Promise by Beth Wiseman is published by Thomas Nelson (2009)