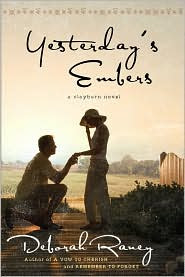 On Thanksgiving Day, Douglas DeVore kissed his beloved wife good-bye, unaware that it would be the last time he'd see her -- or their precious daughter Rachel. Left with five kids to raise on his own, and already juggling two jobs to make ends meet, Doug wonders how he'll manage moment by moment, much less day after day, without Kaye's love and support.

When Mickey Valdez, a daycare teacher, hears of the tragedy, she offers to lend a helping hand. After all, it isn't like she has a family of her own waiting for her at home. Her brothers are all happily married, but love seems to have passed her by.

Then a spark ignites...but will the flame be too hot to handle?

For one last time we get to return to Clayburn. This time we are introduced to Doug, a grieving widower with 5 children who recently lost his wife and daughter, and Mickey, a single schoolteacher who yearns for love. The story involves seeing how Doug struggles to get through every day life by himself and realizing that he needs someone else in his life. This someone ends of being Mickey, who takes care of his children at her daycare. Their relationship happens a break neck speed and the two find themselves engaged, married and bickering within months. I did like the chemistry between the two although I thought their relationship happened way too fast. They would have benefited from a longer dating relationship plus outside help from friends and family probably would have strengthened their relationship.

While I did enjoy this book, there were several issues I had problems with. The main reason is pretty much Doug and his actions. I really felt bad for Mickey and what she had to go through after marrying Doug. I also felt understand Kayeleigh's frustration and anger over her dad getting remarried so soon. It was totally understandable why she acted the way she did. However, there were times when she went overboard and her father didn't do anything to reprimand her. Instead he made Mickey be the bad guy which showed how he didn't respect her. There were times when I just wanted to shake Doug and be like "What are you doing???" I felt like he was just wallowing in his grief and let emotions overtake him and he honestly didn't know what he was doing. By the time the ending came, I was so frustrated with him and I just couldn't believe that Mickey wanted to stay. I was also really shocked with the incident involving Kayeleigh. It was really out of the blue and I'm surprised more wasn't brought up about it. The issue of Mickey being a Catholic and Doug not being one was brought up heavily in the beginning of the book and then just dropped. We never find out if she or he ends up converting to the other's denomination. It would be such a big deal except for the fact it was a big issue in the beginning of the book.

Overall though, I enjoyed this read and am sad that the series is over. I really feel like I have gotten to know the people of Clayburn and would have liked to drive into the town and visit one day. The writing is crisp and fresh and the storyline is relevant for those in the same situation as both Doug and Mickey. I will miss returning to Clayburn but I'll be looking forward to any of the author's future books.