Book Review: "Katt's In the Cradle" by Ginger Kolbaba and Christy Scannell 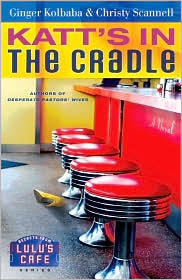 When you're in the trenches, sometimes you're up to your neck in mud. That's the not-so-glamorous life of a pastor's wife.

Felicia's family is...complicated. That's putting it nicely. Now they're flying in from LA -- all at once -- to stay with her...just when her brother-in-law, Javier, and Mama aren't even speaking to each other. And the whole church will be there to witness the feud.

Mimi has a lot on her mind with her four energetic kids -- especially Milo the screamer, with his Pavarotti voice. Then her live-in alcoholic dad starts to mow their lawn at midnight.

Lisa has her hands full with loudmouth Tom Graves and the other troublemakers at Red River Assembly. Then vicious rumors start to fly about the Barton family...and the attacks and threats get increasingly personal.

Jennifer is pushing her adopted daughter, Carys, in a stroller, when she notices a black town car -- the same car she's seen several times over the past week. Could someone be following her?

The PWs plunge into an unnerving mystery...and discover what "family" really means.

It's time to head back to Lulu's Cafe and meet up again with the ladies of the Pastors Wives Club. The story is once again a mixture of humor and seriousness and the four women tackle their own personal problems as well as those coming from their church families. It's a bit strange not have have Kitty around, making snide remarks and thinking she is holier than everyone else. However, not to fear, as her husband has remarried a younger Kitty-clone who seems to share too much info about what goes on in the bedroom.

The two stories I found to be most interesting this time around were Jennifer's and Lisa's. It's interesting because throughout the entire series, these two women have been my favorite with the most intriguing story lines. Jennifer's story had a mystery surrounding it plus it was nice to see Father Scott again. Lisa's story was highly emotional and extremely frustrating. From the beginning of the series, I've never liked their congregation and this book just solidified my views on them. Her family was very brave and strong to stick through the conflict. Lesser souls would have caved but they did not. Mimi's story involving her dad will probably ring true for some readers who have dealt with alcoholic family members. It's heart wrenching to see someone constantly hurt themselves and there's nothing you can do to stop them. I unfortunately did not find Felicia's story to be very interesting. It almost felt as if the authors felt like they had run out of story ideas for her character and just threw something together. There's nothing wrong with her situation but it just felt rather boring compared to the other three. There was a lack of drama or conflict. I did enjoy the scenes where all the pastor's wives in the area got together and finally realized that it was ok to become real with one another and share their burdens. It's sad how much pressure people put on pastor's wives and other members of the family simply because they are related to preacher.

Overall I really enjoyed this book. It was an extremely fast read for me and I'm sorry that the series has ended. Reading this series has broadened my outlook on the family's of pastors and given me more compassion and understanding towards them. We shouldn't put them on a pedestal or have such high expectations on them. They are human beings just like the rest of us and should be treated as such. I really recommend this entire series for both a fun read and a learning experience at the same time.