Book Review: "It's a Green Thing" by Melody Carlson 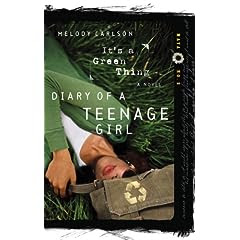 For the first time that she can remember, Maya Stark is beginning to feel like a "normal" teenager. Even with her mother in jail for drug possession and her pop-star father away on his comeback tour, Maya's new life with her uncle Allen and cousin Kim is coming together. Summer vacation's just beginning, and with a new job, a new boyfriend, and a new car (hybrid, of course), things are finally starting to look up.

But that doesn't mean life is about to get any easier. Maya's still devoted to living Green, and her uncle offers her a Green column in his newspaper. With the opportunity to make a difference in the town's attitude toward the environment, Maya wonders how this fits with her newfound commitment to Christ. And if she can really consider herself a Christian when her feelings toward a fellow youth group member are anything but loving.

The Diary of Teenage Girl series is, in my opinion, one of the best series out there for teens, Christian or not. There have been four girls spotlighted throughout the series and each has been different yet enjoyable to read. Some girls I've liked more than others and I will have to say that Maya's series is my favorite. I like Maya because she asks the questions that challenge Christians who think they know everything and isn't afraid of what others might think of her. In this book Maya feels that she's starting to become a normal teenager and is able to escape the jumbled life she used to live.

I really liked Maya's reactions to the Christian girls from her youth group. I have felt that Amanda and Brooke represent a good deal of real Christians teens who are two faced. They act like they are the perfect Christians while they are at church but then in real life they condemn everyone but back down when challenged. They also seem to throw themselves at boys a lot. I've experienced this treatment myself and the way Maya reacted was realistic. If she had just immediately forgiven the girls and let them walk over her, I would have been very disappointed in this book and would stop reading. However, she challenges them, gets irritated and tries to seek justice for the wrongs they caused. I really liked the way that everything got worked out involving the incident between Brooke and Maya. It's not neat and tidy and obviously Brooke needs to work on her attitude but it's an ending that I can accept because it's not sugar coated with fake Christianity. Also the situations with her and her boyfriend were handled tastefully and realistically as well.

Throughout the book Maya shares tips on saving the planet. Maya's green tips are great and I've tried several of them myself (although the tip about the car and not using the air conditioner or even opening the windows won't really work during summer). They really make you think about saving the environment but they are not trying to push an agenda. The only thing I would have liked would have been a response from Caitlyn to Maya's questions about being green and being vegan. It would have just been interesting to see what she would have to say or what most Christians think about that subject. This series is a favorite of mine and I'm looking forward to the rest of Maya's adventures.