Book Review: "How Do I Love Thee?" by Nancy Moser 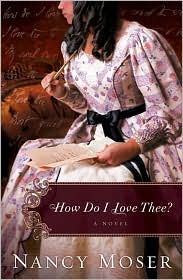 The year is 1845. Elizabeth Barrett is a published poet--and a virtual prisoner in her own home. Blind family loyalty ties her to a tyrannical father who forbids any of his children to marry. She has resigned herself to simply existing. That is, until the letter arrives...

"I love your verses with all my heart," writes Robert Browning, an admiring fellow poet. And as friendly correspondence gives way to something more, Elizabeth discovers that Robert's love is not for her words alone. Could it be that God might grant her more than mere existence? And can she risk defying her father in pursuit of true happiness?
This book was absolutely fascinating to read. I will admit that I have not read any of either Elizabeth or Robert's poetry before, other than the famous title of this book. I'm not too big a fan of poetry and while I will admit the writing is beautiful, it just doesn't do anything for me. Therefore because I was almost completely unfamiliar with their story, this book was a little harder to get into than the author's previous historical fiction works. However, I soon was able to find myself getting swept up in this world of hidden romances and a yearning for true love. Once again, the story is told in first person and the reader is taken into the mind and world of Elizabeth Barrett and her family. The descriptions of the settings, clothing and actions of the people have been well researched and carefully detailed. You feel swept up into the story and feel that you're actually in 1800s England. I really felt for Ba and her family. I cannot process the logic of her father's thinking. It just goes against everything from what's expected of society to biblical meaning to human nature. It was also incredibly hypocritical of him to marry himself and have all those kids yet expect every single one of them to stay at home and be controlled by him. I'm so glad that several of them managed eventually to break away and that Ba was able to find true happiness. I could not imagine being almost 40 and still living at home under my father's command and not being allowed to get married.

At the end of the book are a bunch of appendixes which help to fully enjoy the story. The author has included chapter by chapter, where she added to the story and which parts were actually real life events. This is extremely interesting to be able to distinguish fact from fiction and even more so when you find out that some things that sound too good to be true, actually happened! An even bigger delight is the inclusion of Elizabeth's poems from "Sonnnets from the Portuguese". After reading her love story, the poems become more beautiful and have more significant meaning.

My only qualm is that I feel the girl on the cover of the book is way too young to be Elizabeth. Clearly throughout the story, she's described at being 30 or older whereas the cover model looks like she's in her young twenties. It's a minor complaint though. Nancy Moser is such a gifted writer and I really think she's found her niche in writing historical fiction. I'm looking forward to whoever her next featured lady will be and discovering her past.