Book Review and Giveaway: "All That Glitters" by Nicole O'Dell 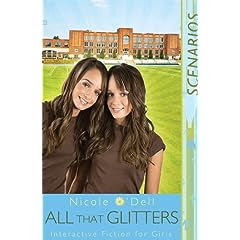 Drew Daniels finally has what she thought she wanted—popularity and a cute boyfriend. But now she’s faced with choosing between pleasing her boyfriend and doing what’s right. Tween readers make the choice in this interactive story and see how the consequences change Drew’s life. Includes a contract and prayer to remind the reader of the importance of making godly decisions.

I will say that I liked this book A LOT. To be honest, I enjoyed it more than the first book in the series. Previously I had issues with characters acting younger than their age or too many actual sermons in the book. This book had neither. Both Drew and Dani act like actual freshmen in high school. It's interesting to see how they began to grow apart and start trying to form their own distinct personalities. Stories about twins growing up sometimes have one twin resenting the other for leaving them behind. This one begins that way but Dani soon finds her own niche. Once again, the characters have close and good relationships with their parents. They can confide in them and are able to turn to them in times of need. In return, the parents are understanding and allow their daughters to choose their own paths. I really appreciated how the girls' mother was compromising in terms of their clothing choices. While she had set guidelines about what they could wear, she also was willing to let Drew make her own decisions. I liked the scene where she comprised with Drew involving the layering of clothing. I'm glad she was willing to let her do her own thing and still respect the guidelines she had set down. They also were cool with letting their daughters hang out with guys because both girls respected the rules set for them. I thought that the situation Drew found herself in was very relatable to what goes on in high school these days. Granted, the party involved everything that could possibly happen, but it still was portrayed in a realistic light.

The only qualm I had was a line where Dani is horrified to hear that Drew held hands with a boy. This made me shake my head a bit because it sound like holding hands makes Drew sound like a loose woman. If they had been kissing, then I could understand the shock. I know that it could imply that holding hands could eventually, down the road lead to more intimate things. However if you're in high school, it really would not be that big of an issue.

That being said, I really enjoyed this book. It's a fun read, the characters are real, and the story is something that a lot of teens either have faced or will face in the future. I've been told by the author that the next few books will also have themes that will appeal to older teens so I'm looking forward to those. I wish that I had the opportunity to go back in life and be able to step back and look at both outcomes before I made a decision. Teens will enjoy this one.

All That Glitters by Nicole O'Dell is published by Barbour (2009)

I'm giving away a brand new set of BOTH of the first two books in the Scenarios for Girls series! To enter you must leave a comment with your email address so I can contact you if you win. I'll pick a name and announce the winner on Friday, August 21. International entrants welcome. Good luck!