"Reclaiming Nick" by Susan May Warren

This week, the Christian Fiction Blog Alliance is introducing
RECLAIMING NICK
( Tyndale Fiction, 2007) by
Susan May Warren
ABOUT THE AUTHOR:

Award winning author SUSAN MAY WARREN recently returned home to her native Minnesota after serving for eight years with her husband and four children as missionaries with SEND International in Far East Russia. She now writes full time from Minnesota's north woods. Visit her Web site at www.susanmaywarren.com.

Here is my review from back in February: 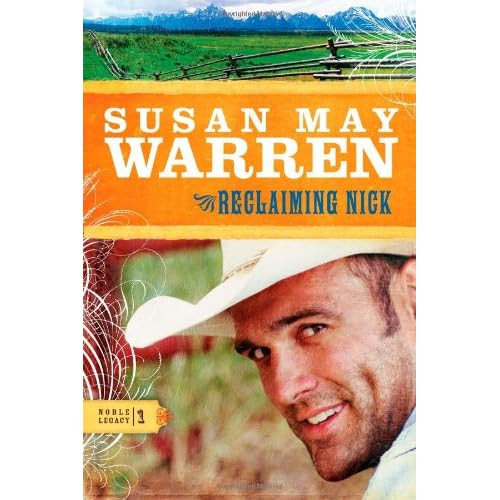 I wanna be a cowboy baby

Nick Noble is a modern day prodigal son. He's finally returned to the family ranch after leaving ten years ago. His father has died and Nick has found out that the ranch has been split between him and his siblings and his former best friend Cole. He wants to know why Cole should get what is rightfully his. Piper is pretending to be a ranch cook so she can investigate Nick who she believes is the cause of why her brother went to jail. The two develop a relationship against Piper's wishes. Meanwhile many secrets float around the ranch, and it also looks like there is someone who doesn't want anyone to own a part of it.

First off, look at the book cover! Woooo! Love those dimples, he looks just like Colby from season 2 of Survivor. So it was really easy to picture Nick, which is good because he was a really interesting, well developed character. Him, Maggie, and Cole all have a history with everyone not knowing the full truth about each other. It sounds soap opera-ish but it doesn't come off that dramatic. I enjoyed Piper's attempts to hide that she couldn't cook. She really got lucky with the roundup takeout dinner. Although hearing about Rocky Mountain oysters was just gross. Ewww. But it was very cool to learn about the happenings at a rodeo ranch (although those poor calves that got branded). Also you don't know who is causing all the bad things until the last few chapters, I mean I literally didn't see it coming. The only thing I didn't seem to get was that everyone was making such a big deal about Nick's discovery about Cole's relation to him. Yet no one says anything about Stephanie and Rafe's (well he isn't there) reaction to this news. It was like it was only Nick's situation to deal with. Stephanie also doesn't get fleshed out much but she'll be having her own book soon. I'm looking forward to the next book which will be about Rafe. Learning about cowboys has never been so much fun..and if Rafe's cover looks anything like Nick's..."VBG" Another highly recommended SMW novel!!!

If you would like to hear more about Nick, he has his own blog. Also, the first chapter is there...
CFBA