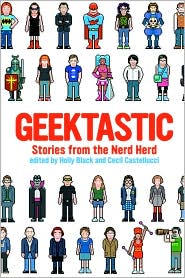 With illustrated interstitials from comic book artists Hope Larson and Bryan Lee O'Malley, Geektastic covers all things geeky, from Klingons and Jedi Knights to fan fiction, theater geeks, and cosplayers. Whether you're a former, current, or future geek, or if you just want to get in touch with your inner geek, Geektastic will help you get your geek on!

I will not lie. I am a total geek. I have admitted this many times and I will not be ashamed. I am a Star Wars nerd, I watch Lord of the Rings marathons, I read the entire Harry Potter series at least once a year, I know everything about James Bond. The only geeky thing I'm not really into is Star Trek, but I will admit to watching the newest one and really enjoying it. That said, this book was PERFECT for me. It's pretty much the story of my life.

What I really love about this book is that I can totally relate to many of the stories. Even greater is the number of stories that feature girls as being totally into the geek culture. Too often the stereotype is that only nerdy guys who have no friends are geeks, but this book shows that girls, cool girls can be geeks and enjoy it. Of course there are also many stories that show how the "in crowd" shuns the geeks and the hardships that goes from feeling as you are a freak for the things you like. Many of the stories are painful to read because of the treatment received from others. However, there are still others that show it doesn't matter what others think as long as you enjoy what you do. I really loved the comic strips that were featured in between the stories. These were laugh out loud hilarious in their portrayal of the different types of geekdom. I wish there was a whole book on just these comics alone.

I did like some stories better than others. There were a few that I really just could not get into. I'm not sure if it was because I was unaware of the background of the story or because I was unfamiliar with the author's style of writing. Also some stories featured a bit more sex and language than I would have liked to read. That being said, there's something for everyone in this book. Even if you have no idea what a Wookie is or can't speak a lick of Klingon, you'll still enjoy the multitude of talent from the authors who contributed to the book.

I'm giving away 5 brand new copies of today's book! To enter you must leave a comment stating how you are a geek with your email address so I can contact you if you win. Entries without any geekiness will not be entered. I'll pick 5 names and announce the winners on Monday, September 21. Open to US and Canada entries. Good luck!


PLEASE LEAVE A WAY FOR ME TO CONTACT YOU!!!!