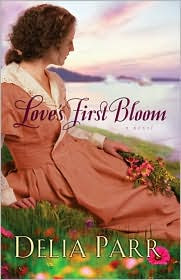 Ruth Livingstone's life changes drastically the day her father puts a young child in her arms and sends her to a small village in New Jersey under an assumed name. There Ruth pretends to be a widow and quietly secludes herself until her father is acquitted of a crime. But with the emergence of the penny press, the imagination of the reading public is stirred, and her father's trial stands center stage. Asher Tripp is the brash newspaperman who determines that this case is the event he can use to redeem himself as a journalist. Ruth finds solace tending a garden along the banks of the Toms River--a place where she can find a measure of peace in the midst of the sorrow that continues to build. It is also here that Asher Tripp finds a temporary residence, all in an attempt to discover if the lovely creature known as Widow Malloy is truly Ruth Livingstone, the woman every newspaper has been looking for. Love begins to slowly bloom...but is the affection they share strong enough to withstand the secrets that separate them?

I'm not quite sure why I've been avoiding Delia Parr's books. It's not that I have anything against her. In fact, I have all her books. I just haven't read any of them yet. However after reading this one, I think I'm going to have to go back and read all of them. I really enjoyed this story. It was a good historical read with a touch of mystery and plenty of romance as well.

The story deals with a lot of deceit and lying. Ruth is trying to protect her father but is deceiving the people who are helping her. She feels horribly guilty about lying to them but due to her loyalty and wanting to honor her father, she keeps up the charade. This puts her in an awkward situation as people think worse of a person by her made up situation. I don't know if I could do that especially after finding out my father was keeping secrets from me as well. Ruth handles it a lot better than I would especially after she meets up with Jake Spencer. The chemistry between the two is handled well although it's interesting to think that what Jake needed was right under his nose and he didn't know it.

While I really enjoyed the story, I had one small qualm. Why didn't Ruth change her name to something else? She stays with Ruth throughout the entire story. If I was trying to hide my identity, I would have picked a different first name to disguise myself. I was really surprised that people didn't find out about her sooner. The resolution to Ruth's problem seemed a little soap opera-ish dramatic to me. Not that there was anything wrong with it, but it seemed like it was a plot line that came out of nowhere to make the story more exciting.

Overall I enjoyed the story. Parr kept me turning pages and I never lost interest at all in the story. I'll be looking forward to going back and reading the rest of her backlist.