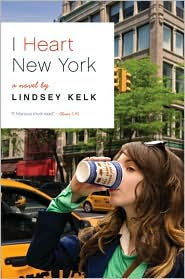 When Angela catches her boyfriend with another woman at her best friend’s wedding, she’s heartbroken and desperate to run away. (Especially once she’s confronted the bride and inadvertently broken the groom’s hand, in front of the entire reception!) Fleeing the messy situation and clutching little more than a crumpled bridesmaid dress, a pair of Louboutins, and her passport, Angela jumps on a plane, destination—NYC.

Holed up in a cute hotel room, Angela makes friends with a benevolent concierge, Jenny, a chatterbox Oprah wannabe with room for a new best friend. After a New York makeover, some serious retail therapy, and a whirlwind tour of the city, before she knows it, Angela is dating two sexy guys. And, best of all, she’s gotten her big break as a writer—blogging about her New York escapades for a real fashion magazine. But while it’s one thing telling readers about your romantic dilemmas, it’s another figuring them out for yourself! Angela has fallen head over heels for the Big Apple, but does she heart New York more than home?

If you are a chick lit fan, you are going to love this book. This books screams chick lit and is the perfect example of the genre. This book is not deep heavy literary fiction that is going to change the world. If you are expecting a serious read that will force your brain into over thinking this is not the book for you. If you are, however, looking for a fun escape read with a little bit of fantasy living that everyone wishes that they could have and takes place in the most exciting city in the world, then this it the book for you.

If only everyone could be so lucky and have find a Jenny when they are down on their luck. Angela doesn't know how good she had it at finding her new friend. Seriously, Jenny is like a fairy godmother who takes Angela under her wing. Right from the get go, Angela is treated like royalty and gets to do things almost every girl dreams of but either can't afford or is not given the opportunity to experience. Hair treatments, shopping trips, clubbing adventures - the perfect life for a 20-something in NYC. Plus two hot guys are there to take away any thoughts of her cheating ex.

Angela's adventures take her all over the city. I had a fun time traveling along with her as she discovered the wonder that is NYC. The two guys she dates give her a different perspective of life in the city. One is a well to do businessman while the other is a hipster musician. One is upscale Manhattan, the other is artsy Brooklyn. BTW, I've visited Brooklyn and I love it. Why all the hate from Manhattanites? Please explain!

There are times where things are a bit unbelievable. Of course the whole Cinderella transformation is unlikely to happen to everyone who comes to NYC. Angela's only been in the States for a few weeks and gets a job like *that*. She stars a blog for work that almost immediately is a hit right from the start. Personally, I'm a bit wary of that because unless you are a celebrity who has been talking about starting up a blog weeks before to gather hype, almost every blogger starts off with either a very small or non existent readership. Also Angela seemed a bit naive to think that the two guys she was dating wouldn't find out about each other. She talks about them all the time on her blog and the nicknames she doesn't give are very discreet. Plus she talks ABOUT her blog to BOTH guys so of course they are going to check it out, see their portrayal on there AND see that she's dating another guy at the same time. A bit more discreetness could have helped her out.

However, even with those qualms, I really loved this book. It was just what I needed in between all the serious books I have been reading lately. Except for the bit of my boyfriend cheating on me, I would have loved to trade places with her. New York City is one of my favorite places to visit and it's always wonderful to read about it from fresh eyes. Kelk makes the reader feel as if they are actually there and live vicariously through Angela. I'm excited that her books are now coming Stateside. She's written several other books that have been published in Britain that continue the adventures of Angela and I really hope that they make it over here soon. If you are ready for some fun chick lit, this is the perfect book for you. HIGHLY recommended.

I'm able to give away three copies of this book provided by the publisher. To enter, you must fill out the form and have a US address. Winners will be picked Friday, September 17.

PLEASE use the form only to enter the contest. For any comments about the book, review, etc. please use the comments link at the bottom of the post. All information must be filled out correctly or else your entry will not count. (ie. you must use FULL name and list your mailing address). Your info will only be used for this contest and will be deleted after the contest is over.