Book Review: "Heart of the Matter" by Emily Giffin 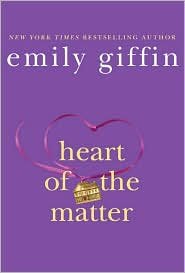 Tessa Russo is the mother of two young children and the wife of a renowned pediatric surgeon. Despite her own mother's warnings, Tessa has recently given up her career to focus on her family and the pursuit of domestic happiness. From the outside, she seems destined to live a charmed life.
Valerie Anderson is an attorney and single mother to six-year-old Charlie--a boy who has never known his father. After too many disappointments, she has given up on romance--and even to some degree, friendships--believing that it is always safer not to expect too much.
Although both women live in the same Boston suburb, the two have relatively little in common aside from a fierce love for their children. But one night, a tragic accident causes their lives to converge in ways no one could have imagined.
In alternating, pitch-perfect points of view, Emily Giffin creates a moving, luminous story of good people caught in untenable circumstances. Each being tested in ways they never thought possible. Each questioning everything they once believed. And each ultimately discovering what truly matters most.

Believe it or not, even though I'm a HUGE chick lit reader, this is actually the first Emily Giffin book that I have physically read. I listened to an audio book of Love the One You're With and while I didn't necessarily agree with the actions of some of the characters, I really enjoyed the author's style of writing. That's why I was looking so forward to reading this book. And one again, even though I didn't agree with how the story ended, I really enjoyed reading it.

This book deals with infidelity and how it affects both the person being cheated on and the person being cheated with. Let me just state out front that I am totally Team Tessa. This book is set up in opposing viewpoints from Tessa and Valerie, the wife and the mistress. Tessa's section is written in first person while Valerie's is in third person. This feels like the shift is leaning towards Tessa as we get to see her thoughts directly. While I feel immense sympathy for Valerie due to what happen for her son, I feel no sorrow for her in regards to her relationship with Nick. She KNEW he was married, what did she think was going to happen? And even if he did end up staying with her, what was to stop him from cheating on HER? The leaning towards Tessa is even stronger because I could find no fault with her that would cause Nick to even think about cheating on her. She was a good wife and a good mother. So he didn't like her friends, and even that she was having problems with them herself, that is NOT a reason to cheat on your spouse!

What I think would have made the book even better would have been to include chapters from Nick's point of view. This way the story would have been more complete as the reader would have been able to see how he viewed both women and ultimately what made him so attractive to both of them. Otherwise, we have no idea why he did what he did. Thus this makes him to come out as the villain of the story. I did not like Nick at all. His reasoning for what he did is rather flimsy and honestly from what I read, I could not see that Tessa had done anything wrong at all. It seems as if Nick has a God-complex and wants to be needed all the time. That is how Tessa found him and now that she has become settled in their marriage and has discovered a life for herself, he feels no longer needed. Thus he turns to Valerie, who is vulnerable and needs him for her son.

I wasn't too big a fan of the ending. Marriage vows is something I personally hold to be very sacred and it really breaks my heart when someone dismisses them and hurts the other spouse. Still, without letting personal feelings get too much into the way of the story, I did enjoy the book very much. I really like Giffin's style of writing. She creates a really good story, allowing you to see infidelity from both angles. I also found interesting the minor characters in the story, such as Valerie's brother, Tessa's parents, and her friend April. Their stories were just as interesting as the main plot. There are cameo's from previous books in this story, but as I have not read those books yet, I did not know who these people are. ( I know, sacrilege to Giffin fans!)

If you're in the mood for a more serious chick lit read, this is a good book. There's lots to think about afterward and it is always really good for discussion. It will interesting to see which Team you choose to be on.

Heart of the Matter by Emily Giffin is published by St. Martin's Press (2010)