Robert Liparulo is a former journalist, with over a thousand articles and multiple writing awards to his name. His first novel, Comes a Horseman, released to critical acclaim. Each of his subsequent thrillers—Germ, Deadfall, and Deadlock—secured his place as one of today’s most popular and daring thriller writers.

He is known for investing deep research and chillingly accurate predictions of near-future scenarios into his stories. In fact, his thorough, journalistic approach to research has resulted in his becoming an expert on the various topics he explores in his fiction, and he has appeared on such media outlets as CNN and ABC Radio.

Liparulo’s visual style of writing has caught the eye of Hollywood producers. Currently, three of his novels for adults are in various stages of development for the big screen: the film rights to

Comes A Horseman. were purchased by the producer of Tom Clancy’s movies; and Liparulo is penning the screenplays for

Liparulo’s bestselling young adult series, Dreamhouse Kings, debuted in 2008 with House of Dark Shadows and Watcher in the Woods. Book three, Gatekeepers, released in January 2009, and number four, Timescape, in July 2009, and number five, Whirlwind in December 2009. The series has garnered praise from readers, both young and old, as well as attracting famous fans who themselves know the genre inside and out. Of the series, Goosebumps creator R.L. Stine says, “I loved wandering around in these books. With a house of so many great, haunting stories, why would you ever want to go outside?”

With the next two Dreamhouse books “in the can,” he is currently working on his next thriller, which for the first time injects supernatural elements into his brand of gun-blazing storytelling. The story is so compelling, two Hollywood studios are already in talks to acquire it—despite its publication date being more than a year away. After that comes a trilogy of novels, based on his acclaimed short story, which appeared in James Patterson’s Thriller anthology. New York Times bestselling author Steve Berry calls Liparulo’s writing “Inventive, suspenseful, and highly entertaining . . . Robert Liparulo is a storyteller, pure and simple.” He lives with his family in Colorado. 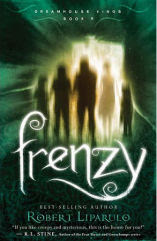 Their destiny is to fix history. Their dream is to get home.

When you live in a house that's really a gateway between past and present, you have to be ready for anything. It's a painful fact the Kings have faced since moving to Pinedale eight days ago. Desperately trying to rescue their mother from an unknown time and place, brothers Xander and David have lunged headlong into the chaos of history's greatest--and most volatile--events. But their goal has continually escaped their grasp.

And worse: Finding Mom is only a small part of what they must do, thanks to the barbaric Taksidian. His ruthless quest to sieze their house and its power from them has put not only the family, but all of mankind, in grave danger.

Somehow, the key to it all hinges on Uncle Jesse's words to the boys: "Fixing time is what our family was made to do." But how can they fix a world that has been turned updisde down--much less ever find their way home?

At long last, the secrets of the house and the King family are revealed in the stunning conclusion to this epic series.

If you would like to read the Prologue and first Chapter of Frenzy, go HERE.