Book Review: "So Not Happening" by Jenny B. Jones 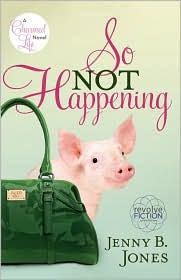 Isabella Kirkwood had it all: popularity at a prestigious private school in Manhattan, the latest fashions, and a life of privilege and luxury. Then her father, a plastic surgeon to the stars, decided to trade her mother in for a newer model.

When her mother startsover with her new husband, Bella is forced to pack up and leave all she knows to live with her new family in Oklahoma. Before her mother can even say "I do," Bella's life becomes a major "don't."

Can Bella survive her crazy new family? Will the school survive Bella? How cana girl go on when her charmed life is gone and God gives her the total smackdown?

I'm a huge Jenny B. Jones fan but when I first picked up this book, I thought "Oh no...another character in a YA book named Bella????" Luckily this Bella has nothing to do with that another character that shares her name and there are no sparkly vampires in this book. Instead this Bella has to deal with going from being Gossip Girl royalty to living with Old MacDonald.

While I felt bad for her because of how things happened so quickly, I thought it was quite fun to read about Bella's transformation from city chick to country gal. I think though what made it a little harder is that Bella seems very nice. She's not stuck up, a bit spoiled maybe, but not like a whiny socialite. So when her new school suddenly turns on her, I just felt so sympathetic for her. Although, if she had said something mean about me I probably would not be feeling that way. It's interesting how it's the ENTIRE school that gets angry. I swear kids who go to schools in the Midwest tend to be extremely close to each other.

This treatment would lead to her trying to get into good graces with the newspaper editor. I understand why Luke was hard on Bella and all the tasks he made her do ended up being good for her. Still, he annoyed me and I'm not ashamed to say that I was so glad when she stood up to him and was able to prove him wrong several times. What's great about the book is that it's not just about Bella but also the story of peer pressure and the dangers behind it. It's extremely relevant with what is going on in high schools today and I feel that teens who read it will be able to relate to what's going on. The plot is not light and happy then, it's quite serious.

This was a really fun read all around. At over 300 pages, it's longer and a bit more heavier in material than most general market YA chick lit. It's considered Christian fiction, but honestly I don't think people who don't like God and other preachy stuff hidden in stories will get offended. The story is more about Bella learning to grow up and become more mature. There's a lot of laughs in this book (I nearly died when Bella finds out her stepdad's secret) and it's a feel good read. If you're a fan of Jenny's books, you're going to love this one as well. If you've never read her, this is a great place to start and I bet you will think she fits right up there with the general market YA authors. This is one of those reads where I'm pretty much guaranteeing that you will love it. HIGHLY recommended.

So Not Happening by Jenny B. Jones is published by Thomas Nelson (2009)