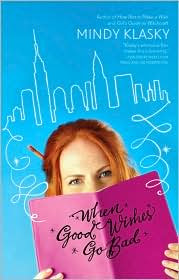 Things that have disappeared: her boyfriend; her life savings; three-and-a-half million dollars from the theater company that pays both their salaries. (Coincidence? Um, no.) Also, the groundbreaking play she's been slaving over has vanished in a puff of copyright-colored smoke.

Other, weirder things that have appeared: a magic lamp complete with genie wishes. A fully furnished (and paid-for) Manhattan condo and fabulous designer wardrobe. (The last two courtesy of the first one, obvs.)

So Becca's putting that last wish on hold. What with discovering a mesmerizing new play, getting it onstage and falling hard for the adorably awkward guy who wrote it, Becca is swamped. And that's without factoring in the guerrilla gardener, popcorn magnate and the gender-bending genie with an agenda of his/her own.

Be honest, if you came across your own personal genie who granted you wishes, would you honestly know what you would wish for? I don't think it would be as easy as you think. I would probably ponder my choices for a long time to make sure that I would get the most out of each each. If I had a genie like Teel, they would probably be very annoyed with me for taking such a long time to make a decision. I don't normally read paranormal books and other than Harry Potter, I usually don't even really like books about magic. But Mindy Klasky writes about those subjects with a chick lit twist so being a chick lit fan, I fell in love with her writing. This series have been fun to read because you can help but wish you were in the same situation as the main characters.

Becca works at a theater as the person who reviews all the scripts that have potential to be put in production. She's just found out that her boyfriend has embezzled the theater of millions of dollars and has run abroad with all the money. Plus the show she had just commissioned now has to be put on the back burner. Just when she's hit her lowest point, a miracle in the form of a gender bending genie comes into her life with the power of granting four wishes. I don't want to spoil the story but there were lots of surprises that I didn't see coming that were a lot of fun. There's great humor in the story as well, I found myself giggling while reading several times.

Even though this is the second book in the series, it can be read as a standalone. Kira, the main character from the first book, makes some appearances but her story is not continued. Reading the first book might help you to understand Teel a bit more and his/her desire to want to get into the garden. I will admit that I liked Kira's story more so than Becca's. There were times when Becca seemed to be a bit selfish. In fact almost all her wishes were solely just for herself. I can understand the first wish being just for yourself but she didn't seem to want help out others even though she had the opportunity.

Overall, this was a really fun read. I really enjoyed learning about what goes on in the background scenes of running a theater. There were so many things that I didn't know before that this book taught me and it gave me a whole new respect for those who have that career. I think everyone would like to share the scenario of having a genie like Becca. It's a wish that everyone wants. This is a light read, great for a day at the beach. I'll be looking forward to the third book in the series to see if Teel finally gets to go to the garden.

This review copy was provided by the Amazon Vine program