Book Review: "Rumor Has It" by Jill Mansell 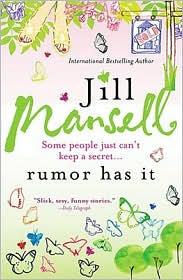 Newly single, Tilly Cole impulsively accepts a job offer in a small town as a “Girl Friday.” Fun job, country house, fresh start, why not? But soon she finds herself in a hotbed of gossip, intrigue, and rampant rivalry for the town’s most desirable bachelor—Jack Lucas.

Rumors of Jack’s “love ’em and leave ’em” escapes abound, and Tilly decides to do the mature, sensible thing... avoid Jack at all cost. But the more time Tilly spends with Jack, the more the rumors just don’t make sense. Tilly doesn’t know what to believe... and Jack’s not telling.

I sometimes think I was born in the wrong country. I absolutely adore anything British. From the accents, to the royalty (woo Prince Harry!), to the music (Beatles!), to the actors (too many to list), to the literature (home of Harry Potter AND Jane Austen), the Empire just has it all. And one thing they have done to a tee is chick lit. British Chick Lit is SO good. I just can't explain it but even though I really like American chick lit, something about British chick lit is just the icing on the cake.

This was my first read by Jill Mansell so I wasn't sure what to expect. Even though I have had great success with other British chick lit authors, I was afraid that this might be the doozy. Boy was I was wrong! This book was FABulous. It has all the elements of a chick lit novel but uses them in such a fun way to read. There are several different stories with all the characters but you never get mixed up and everything just flows together. I never felt lost and never got bored with one story. While Tilly and Jack's relationship is the main focus, Erin and Kaye's stories were enjoyable and equally fun to read.

What I really enjoyed is how likable all the characters were. Well, it took me a while to warm up to Stella but I totally understood why she acted the way she did. But all the other characters were just so fun to read about and gave me no reason at all to NOT like them. I liked Tilly's character. I would have adored to have that Girl Friday job and work for Max. He was just a really nice guy and what him and his daughter were offering Tilly for her job was like a dream come true. I also liked how even though he was gay, nothing was stereotyped about him, he just happened to be a guy that was gay and was a dad as well. Also Jack's character had such depth to him, he isn't just the typical playboy.

Now that I've gotten my first taste of Mansell's books, I am so glad that I have several other of her books in my TBR pile. If they are half as enjoyable as this book, I know that I will enjoy them. Chick lit fans will devour this book as I did. It was just a fun way to spend an afternoon when you need a light read to escape the worries of your day. Note: there is some sex and language but nothing is too overly graphic. HIGHLY recommended.