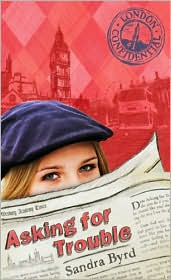 When her family moves to London, 15-year-old Savvy Smith has to make her way in a new school and a new country. She just knows the school newspaper is the right place for her, but she doesn’t have the required experience, and the cute editor-in-chief is not looking to train anyone. She has to come up with a way to prove herself and nab the one available position on the newspaper staff at Wexburg Academy.

Stop that plane! I MUST go to London after reading this book! Teen anglophiles will unite after picking up these books. Seriously, I so envy Savvy and her new life. Sandra Byrd made me drool after reading her Lexi Stuart series. Now I want to talk with a British accent and have a cuppa tea with scones and Devonshire cream.

Savvy is my type of girl. Seriously I loved reading about her. Even though she's an American transplant, she doesn't act obnoxiously or try to compare everything to American stuff. While she wants to fit in, she doesn't go out of her way to get into the in crowd or become popular. She just wants to find her niche. I loved how she had to go through several trial runs before finding it and how the teachers would be relieved when she said she wasn't coming back. The newspaper story is handled very well and even though I think that advice columns are a bit passe, I liked Savvy's approach to it.

I want a Fishcoteque pub near me! First off, Savvy's mom is super cool to just let her go there after school on her own (in a new country no less). Second, the food sounds absolutely delish (I'm totally craving some fish and chips right now). Third, the place is described as being a really fun, yet safe hangout that you can go and grab great food and chill with your laptop. And it's British! What more could you possibly want? Fishcoteque is one of the best hangouts I've read in a YA book this year.

I honestly have no complaints about this book. It was really fun to read and allowed me to travel to somewhere I've always wanted to go to in my life. I really like how Savvy is mature enough to explore places on her own, yet still respects her family and gets along very well with her parents. Their search for a church is quite funny as I can relate to the same ordeal with my parents about trying to see where we would finally fit in. It's really nice to know that even in a different country and culture that there are lots of things that are still the same. Ok, I take it back as there is one tiny little detail I had a problem with. I'm not quite sure why this book is marketed towards 8-12 year olds. It's more of a 11-15 year old targeted range if anything. Other than that little quibble, I LOVED this book and I cannot wait to read the rest in the series. Oh...London is calling...

Asking For Trouble by Sandra Byrd is published by Tyndale (2010)

I hung back at the doorway to the cafeteria of my new supercool British school, Wexburg Academy. Most of the lunch tables were already packed, and the room was buzzing with chatter. The populars, whom I'd secretly nicknamed the Aristocats, commanded an entire table right in the center of the room. Their good looks and posh accents made up the sun around which all other tables orbited. The normal kids were in the second circle, arranged by friends or clubs or activities. The drama table was on the outer edge of the room, and so were the geeks, the nerds, and the punk wannabes--way out there like Neptune, but still planets. Most everyone had a group. I didn't.

Okay, so there was one table with lots of room. The leftovers table. It might as well have been the dark side of the moon.

I skipped lunch--again--and headed to the library. One of the computers was available and I logged on, desperately hoping for an e-mail from Seattle.

There was an e-mail from my grandmother reminding me to floss because British dentists only cleaned adult teeth.

An invitation to join the Prince Harry fan club--​I opened it and gave it a quick scan. I'd consider it more later.

I clicked open the e-mail from my best friend at home--well, it had been my home till a couple of months ago--hoping for a lunch full of juicy news served alongside tasty comments about how she missed me and was planning stuff for my next visit home. I craved something that would take me the whole lunch period to read and respond to and remind me that I did have a place somewhere in this universe.

From: Jen
To: Savannah


Hey, Fortune Cookie, so how's it going? Met the Queen yet? LOL. Sorry I haven't written too much. It's been so busy. Samantha took the position you'd been promised on the newspaper staff. She's brand new, but then again you would have been too. It seemed strange without you at first, but I think she'll do okay--maybe even better than okay. And hey, life has changed for everyone, right? Things are crazy busy at school, home, and church. We hang out a lot more now that a bunch of us are driving. Will write again in a few weeks.

A few weeks! My lungs filled with air, and I let it out slowly, deflating like a balloon with a slow leak. I poised my hands over the keyboard to write a response but just . . . couldn't. What would I say? It had already been weeks since we'd last e-mailed. Most of my friends texted instead of e-mailing anyway, but texting across the Atlantic Ocean cost way too much. And the truth was . . .

I'd moved, and they'd moved on.

I logged off the computer and sat there for a minute, blinking back tears. Jen hadn't meant to forget me. I was simply out of her orbit now.

I pretended to read Sugar magazine online, but mostly I was staring at the clock, passing the time till I could respectably head to my next class.

Five minutes before class I swung my book bag onto my shoulder and headed down the hall. Someone was stapling flyers to the wall. “Hi, Hazelle.”

“Hullo, Savannah.” She breezed by me, stapling another pink flyer farther down the wall. We had math class together--oh yeah, maths, as the Brits called it--first period. I'd tried to make friends with her; I'd even asked her if she'd like to sit together in lunch, but she'd crisply informed me that she sat at the table with the other members of the newspaper staff.

She didn't bother with small talk now either, but went on stapling down the hall. I glanced at one of the flyers, and one sentence caught my eye right away: Looking for one experienced journalist to join the newspaper staff.

I yanked the flyer off the wall and jammed it into my bag. I was experienced. Wasn't I?

A nub of doubt rose inside me--the kind that popped up, unwelcome, anytime I tried to rationalize something that wasn't exactly true or right.

This time I swallowed it back. I thought back to Jen's e-mail that kind of felt like a polite dismissal. I lived in London now.

It was time to take matters into my own hands.
book review FIRST Wild Card Sandra Byrd Tyndale