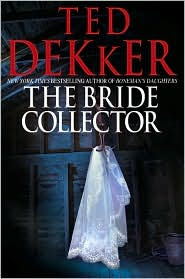 A virtuoso killer is carving a path of death across the west, intent on killing only the most beautiful women, all in the name of love. He has claimed six victims and slipped through the FBI’s fingers, each time leaving behind a hand written note and a bridal veil.

Full of surprising wit and hair-raising twists that will keep you riveted to the end, The Bride Collector will haunt you with a new way of looking at beauty, love and the world in which you live.

It took me a while to finish this book. It's not because I hated the book or the author. I adore Ted Dekker's books. And I enjoyed the story. I was just completely creeped out by the story. Not in a scared to death that I can't go to sleep way but in a "Blargh, I want to throw up because I feel creepy crawlies running up my arm" way. I have discovered that I really don't like stories that involve psychotic killers who have mental problems. My guess is that I don't like how there is no reason for their madness, no true explanation can be given for what they do. I felt this way about the Joker in The Dark Knight. I want a reason, an explanation, an understanding as to why they are acting this way. When the reason is due to an illness, even though this sounds harsh and unforgiving, I just can't justify it as an explanation.

The story revolves around a serial killer who uses a graphic and unique way to kill women. His justification is that he is killing them because they have become the favorites of God and he is essentially delivering the Bride of Christ. Reading the story from Quinton's point of view was just chilling. Yet to me that was the really interesting part of the story. It was like a car wreck, you can't stop looking even if you feel bad or uncomfortable. He did things I did not expect to happen. There were several scenes I was really surprised to see because I was just not expecting them to happen.

Equally enthralling were Brad's interactions with the mentally ill patients. The characters were all unique and really added to the story. Paradise is the one that stands out the most because she is the one that can really help out Brad. Her story is just as heartbreaking as Quinton's but in a different way. I can't begin to describe the emotions that went through me while reading this book but let's say it I felt like my eyes were being open.

If you can't handle gore or even hard core suspense, I would advise you to stay away from this book. It will probably give you nightmares and make you not want to ever leave you house. Overall, even with my quirks about the book and the fact it took me a while to finish, I really did enjoy this book. Dekker has shown again what a master storyteller he is. He completely kept me enthralled and sucked into the story. Faith is woven into the story but it's not as if it's being preached at you. It makes the story. Also for the record, this book is not classified as a Christian fiction book. If you are in the mood for a good suspense story that will tingle your spine (not trying to be cliched), this book is excellent for you. After reading this book, I can never look at my wedding veil in the same way again.