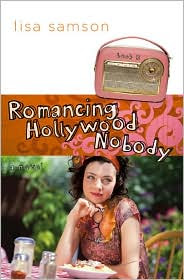 Scotty and Charley find romance in the Highlands when a couple of cute guys in kilts look their way. How will Seth and Jeremy react when they realize the ladies who were interested in them have captured the hearts of a young bagpiper and a Scottish actor?

Meanwhile, as Scotty and her dad look for answers to their questions about faith, they also look for Scotty’s mom. The search takes them deep into mob territory, where someone will go to any length to keep the past a secret. Will Scotty lose everything that’s become important to her?

I really adore this series. Scotty is one of the most refreshing and likable YA characters I have ever read. She's just so incredibly mature and responsible for her age yet still can be giddy and excited when she needs to be. Actually she totally could be the spokesperson for the term Young Adult because that's actually what she is.

This book takes Scotty, Charlie and her new found dad into Virginia as they are on location for a new movie which Charlie is working on. As the title says, there's romance in this book but surprisingly the main focus of that subplot does not involve Scotty. While she's still contemplating her feelings about Seth and discovering the new local boy Angus, the spotlight of romance falls to Charlie. Her relationship with actor Anthony Harris was so fun to read. And then there was the little triangle with her former boss director that just made things even more intriguing. It's good to know that romance doesn't have to end when you become older.

Scotty's relationship with Seth takes a dramatic turn in this book. He just went totally wild and really wants to live up to the bad boy Hollywood lifestyle. I couldn't believe how selfish and reckless he was especially when it came to his mother. I was really glad that Scotty put him in his place even though she's younger than him and not in the business. I found it also interesting that because of this Scotty loses interest in her blog about the Hollywood society. I totally understand but at the same time I was a bit sad because I really enjoyed her blog and how she incorporated a real opinion mixed with the gossip.

There's lots of fun stuff in the book like Scotty being able to eat all the cheese she wants and her discovering the small town where the movie is being filmed. Once again, I loved the mixing of real life celebrities with the characters in the book. Samson has really outdone herself with this series. I hope that more people will discover about this Hollywood Nobody and make her a Somebody. HIGHLY recommended.

Romancing Hollywood Nobody by Lisa Samson is published by NavPress (2008)