Book Review: "My Own Personal Soap Opera" by Libby Malin 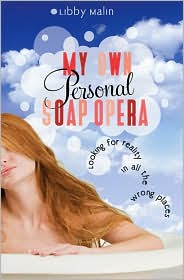 Frankie McNally has found the perfect solution for life’s perplexing problems: as head writer for the daytime soap Lust for Life, she works them out on the air!

Meanwhile, Frankie’s being courted simultaneously by the dashing older man sent in to save the show’s sagging ratings and by the soap’s totally hot leading man. And just when Frankie thinks the plot couldn’t get more complicated, a jewel thief starts copying the show’s storyline-a development that could send the show’s ratings soaring, if it doesn’t get Frankie arrested first...

So here's a little secret about me: when my sisters and I were kids, my mom got us hooked onto All My Children. She claims she was watching it because she had nothing else to do during the day plus it would help her with her English. Meanwhile we got addicted into watching it for several years and kept it a secret from our dad who didn't approve of soap operas. Even now, my husband and his dad secretly watch The Young and The Restless when they are home from work. Therefore as a closeted fan, I could really enjoy everything in this story.

This book was a lot of fun to read. I really loved the behind the scenes look at what goes on in creating a soap opera. Personally I think that soap operas get a lot of flack for cheesy, predictable story lines, mediocre acting and dying popularity. This book tackles all those issues and more. Frankie is doing what she can to keep the show afloat. I really liked seeing what her job consisted off and the day to day life of a head writer. Frankie's assistant really got on my nerves. She was never around to do her job and then when she was there she wasn't 100% into it. Plus she was quite snotty to Frankie and didn't respect her. I have no patience for people like that, especially when there are thousands of people who would have killed for her job. I was glad at what finally happened to her after the way she would treat Frankie. To be honest I didn't really buy Frankie and Victor's romantic relationship. Their business relationship had a lot of zing but when it came to romance I personally thought it was kinda flat.

There is a little bit of sex and some language but both aren't graphic. There's lots of humor and even a mystery throughout the story. Overall this was a fun chick lit read and takes the reader behind the scenes at one of entertainment's greatest guilty past times. Even though I still probably won't be watching soap operas on a regular basis, I now have a new found respect for all those associated with the craft.