Jill Elizabeth Nelson is a member of the CFBA. Her blog, Artistic Blogger, addresses issues about art, art theft, antiquities preservation, and the art of fiction writing. She takes art seriously - when she's not having fun with it, that is. The To Catch a Thief Series combines her love of the written word with her love of other art forms.

The first in the series was Reluctant Burglar , second is Reluctant Runaway. In January 2008, she will reveal the third book, Reluctant Smuggler. Jill is thrilled if the adventures that spill from her imagination can raise awareness about art theft - deemed "a looming criminal enterprise" by the FBI. Jill and her husband, Doug, have four children and live in Minnesota. 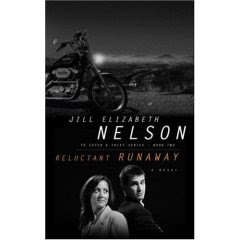 A missing woman…A baby in danger…

Only Desiree can unearth the horrifying secret that links them all.

Museum security expert Desiree Jacobs doesn’t mean to get in danger’s path. Really she doesn’t. But when a friend is in trouble you don’t just walk away. No matter what your overprotective FBI agent boyfriend says! So when Desi and Tony’s date at a presidential ball is interrupted by a frantic Maxine Webb, Desi doesn’t hesitate to jump in.

Soon Desi is neck-deep in a confusing array of villains. Did Max’s niece run away or was she taken? Is she still alive or the victim of a perverse ritual? And who wants her infant son–and why?

Then Tony’s organized crime case collides with Desi’s investigation, throwing them both into the path of something dark and sinister. Something that craves blood...

From the streets of Desi’s beloved Boston to the mountain desert of New Mexico, Desi and Tony must rely on God to thwart unseen forces–and save a young woman and her baby from a villain more evil than any of them can imagine.

"A fresh voice, strong heroine, and unique plot make Reluctant Runaway a can't-put-down read. Jill Elizabeth Nelson is an author to watch in the realm of romantic suspense!"
----SUSAN MAY WARREN award-winning author of In Sheep's Clothing