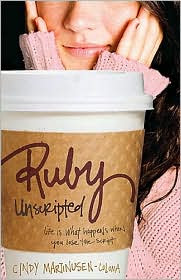 Ruby Madden moves to an affluent town in Marin County, California, believing her dreams are coming true, but her hometown life is drawing her back. Her not-so-secret crush finally likes her. Her older brother decides to stay behind with their newly remarried father. And her best friend gets a boyfriend who's all wrong for her.

And Ruby's new life isn't as easy as she envisioned. Marin High School is a place for the rich and famous with their BMWs, chic clothes, and liberal beliefs-a place where she clearly doesn't belong. Even with her new job at the Underground Coffeehouse & Cinema, she is unsure of how to act and feels insecure about who she is. When she tries out for an amateur film group, the puzzle pieces finally begin to fit. And who is this mysterious guy who's messing with her heart.

I have been a huge fan of Cindy's adult novels as they range from historical fiction to contemporary. They are written extremely well and are so engaging. I think I randomly picked one of her books of the shelf at the library and fell in love with her writing. Therefore when I heard she was now writing YA books, I was eager to see what she was going to put out. Well after reading this book, she is now definitely one of my favorite authors even if she hadn't been before.

Ruby is a character that I could easily relate to while reading. She is not a stuck teen that relies on labels and popularity to get ahead. She instead goes after what she interests in and stands up for herself. I really liked the scenes involving the coffee house and the movie club. I would have love to have been a part of both. I totally understood her dilemma involving the guy that she moved away from all of a sudden liking her AFTER she leaves. It's like, Why now??? Her entire situation is something I think teens can really relate to. You have moving to a new school, divorced parents, trying to fit into a new crowd while still seeing if you can keep up with your old friends. There are also more mature subjects such as teen sex (involving potential statutory rape) but are handled in a manner that will not shock readers. Something of note: Ruby has a gay friend but it's really not a big factor and something that just happens in the book. I only point that out for any readers that might find this objectionable.

There was one tiny thing that bugged me but it may be because I am older than the characters in the book. The constant texting got to me. I could not understand why no one ever used their phone to actually call each other. I understand using texting when you can't talk or it's easier to text in a situation. There was just one scene where Ruby can't get a hold of Kate through texting but instead of picking up the phone and actually calling her, she just keeps texting. I just wanted to scream "USE THE PHONE FOR WHAT IT IS ACTUALLY FOR!!"

I really think that general YA readers will adore this book. It totally speaks to a teen and what they are going through. Cindy's writing totally rivals that of mainstream YA writers and really keeps you engaged throughout the story. There might be Christian readers that complain that there is not enough faith issues tackled in this book and that the mention of God isn't that prevalent. However, I feel that this book balances it perfectly. I think the purpose of the story is not to preach but just to portray a good story that happens to have a Christian character. If I was a non Christian YA reader, I would not feel like there was any religion being crammed down my throat. It is a wonderful read and speaks to the target audience of YA readers very well. Seriously, if you say you enjoy YA books you NEED to pick up this book and read it. It's probably going to be one of my favorite YA reads of the year. HIGHLY recommended.