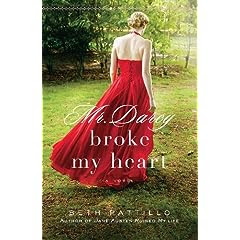 Claire Prescott is a sensible woman who believes in facts and figures, not fairy tales. But when she agrees to present a paper to a summer symposium at Oxford on her ailing sister's behalf, Claire finds herself thrown into an adventure with a gaggle of Jane Austen-loving women all on the lookout for their Mr. Darcy. Claire isn't looking for Mr. Anyone - she's been engaged to Neil, a sensible actuary, for three years, even though she can't quite bring herself to set a wedding date.

But when a tall, dark and dashing stranger crosses her path, will the staid Claire suddenly discover her inner romantic heroine? Her chance meeting with a mysterious woman who claims to have an early version of Austen's Pride and Prejudice- in which Lizzie ends up with someone other than Fitzwilliam Darcy- leads to an astounding discovery about the venerated author's own struggle to find the right hero for Lizzy Bennett. Neil's unexpected arrival in Oxford complicates Claire's surprising - and unwelcome - journey to the truth about her feelings for her longtime fiance.

I really really really enjoyed reading this book. As a huge fan of not only Jane Austen in general but of the author's previous book, Jane Austen Ruined My Life, I had been eagerly awaiting this book. I felt like I was really a part of the story. The descriptions of Oxford made me feel like I was really there. I would have LOVED to be a part of the class that Claire took on Jane Austen. The discussions on the impact and image of Darcy were incredibly interesting. I was geeked that there were even discussions about who played the right Darcy and excited that no one bashed my personal favorite Matthew McFayden (don't worry, I still love Colin Firth). Seriously Jane Austen fans will swoon over all the Austen trivia and discussions sprinkled throughout the book. I felt that with Claire's character as well, both the hardcore Jane Austen fan and the one that's barely dipped their toe in the Austen pool will enjoy the book. As I have said with the first book, I would have loved for the Formidables to actually exist. The thought of all these works actually existing would blow the mind of any Jane Austen reader or historian. Claire, as a casual fan, acted differently than most fans would which was a nice change. A rabid fan would have devoured those papers faster than you could name your favorite Lizzy Bennett.

Claire's back story is interesting although I felt that it was overshadowed by the Jane Austen papers. It definitely did not turn out the way I expected so there is no predictability there. The only qualm I had with this book was how Claire's sister treats her during the story. I understand where Missy was coming from and why she did what she did but the way she it was very harsh. It was almost as if she had completely disregarded everything that Claire had done for her in the past and wasn't thankful but annoyed at her for doing it. This issue does not get resolved by the end of the book, other than it opening Claire's eyes to how she's been acting. I mean she got angry at Claire for calling her just to tell her about the place. I just felt that Missy was very ungrateful and Claire just lets her walk over her by the end of the book.

Other than this, I really adored this book. I couldn't put it down after I started reading it. I was totally swept into the story, both in present day Oxford and then in the imagined manuscript. I'm not normally a big fan of fan fiction but Pattillo's version of an imagined version of the first manuscript of Pride and Prejudice was wonderful. I would actually want to read a whole bound book of this, if Beth was to write it out completely. This is probably the best book that I have read so far in 2010 and I'm thinking it's going to make my top ten list for the entire year. VERY HIGHLY recommended.

Mr. Darcy Broke My Heart by Beth Pattillo is published by Guideposts (2010)

This ARC was provided by a publicist