Book Review: "How to Be Single" by Liz Tuccillo 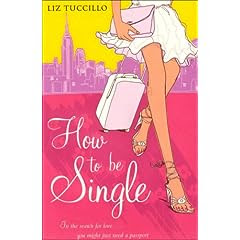 On a brisk October morning in New York, Julie Jenson, a single thirty-eight-yearold book publicist, is on her way to work when she gets a hysterical phone call from her friend Georgia. Reeling from her husband's announcement that he is leaving her for a samba teacher, Georgia convinces a reluctant Julie to organize a fun girls' night out with all their single friends to remind her why it is so much fun not to be tied down.

But the night, which starts with steaks and martinis and ends with a trip to the hospital, becomes a wake-up call for Julie. Because none of her friends seems to be having much fun right now: Alice, a former legal aid attorney, has recently quit her job to start dating for a living; Serena is so busy becoming a fully realized person that she can't find time to look for a mate; and Ruby, a curvy and compassionate woman, has been mourning the death of her cat for months.

So, fed up with the dysfunction and disappointments of being single in Manhattan, Julie quits her job and sets off to find out how women around the world are dealing with this dreaded phenomenon. From Paris to Rio to Sydney, Bali, Beijing, Mumbai, and Reykjavk, Julie falls in love, gets her heart broken, sees the world, and learns more than she ever dreamed possible. Back in New York, her friends are grappling with their own issues -- bad blinddates, loveless engagements, custody battles, and single motherhood. Through their journeys, all these women fight to redefine their vision of love, happiness, and a fulfilled life.

Written in Liz Tuccillo's pitch-perfect, hilarious, and relatable voice, How to Be Single is the ultimate novel for the adventurer in us all.

At first glance, this book looks and reads like a Sex and the City clone. It's easy to think of it a story of single 30 somethings living out their life in the big city, finding and losing love along the way. However, this story is not based in just one city but all over the world. The story seeks to find out how single women everywhere handle their love lives (or lack of one). What's interesting is that the women in the book are not very close friends, in fact some of them barely know each other at all. That's what sets it apart from other chick lit novels. Even though they are all connected through Julie, they aren't very close. Throughout the book though, experiences teach them to get to know each other better and they learn to rely on each other. The book takes time to focus on each of the women and seeing how they cope with their singleness. From trying to force marriage to abstain from sex all together, the scenarios are hilarious, serious and heartbreaking all at the same time. I really enjoyed Julie's jet setting across the globe, from France to Italy to India to Australia. She got to experience first hand what women were like all over the world and the similarities and differences single women had. Even if I didn't agree with all the decisions she made, it was still fun to join her on her adventures and get to see the world through her eyes. The story is not bitter. It's a book on trying to embrace and accept your singleness more than man bashing for guys not going after you.

There is quite a bit of sex and language throughout the book so if that is a problem for you, it's best to avoid the book. However if you are fan of SATC or most mainstream chick lit, you will enjoy this book. If you are single, you'll love the book. If you are one of the lucky ones who have found true love, you'll enjoy this book. It's a great book for anyone who's ever loved, lost and has learn to love their own selves and accept that they are who they are.