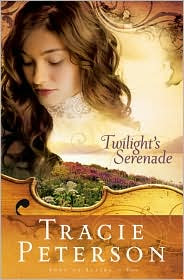 Britta Lindquist left Sitka six years ago in an attempt to distance herself from the love of her life, Yuri Belikov. Upon her return, she finds Yuri absent and his wife about to deliver a child. When tragic circumstances ensue, Britta suddenly finds herself caring for Yuri's children--and her life intertwining with the man she's tried so hard to forget.

But Britta's other great love is for the violin, and her talent is recognized by Brenton Maltese, a conductor from England. He proposes she accept the coveted first chair position in his orchestra and also his hand in marriage. At a crossroads, Britta must determine what her heart truly longs for--and if she's willing to fight for it.

Before I begin this review, I would to note that I only just not realized that I have not read the second book this series. I have no idea how I did this, as I normally try to read all books in a series before reviewing the newest addition. As such, this makes a lot of sense when I look back on this story as to why I was totally confused as to who characters were and why in the world so much had time had passed since the first book. Therefore I will soon need to go back and read the second book in this series to read about what I have missed.

Even with that out of the way, I unfortunately did not really enjoy reading this book. This is sad because normally I really enjoy reading Tracie Peterson's novels. I have read about 95% of all her books, and believe me she's written A LOT of books. However, this one just did not really fit with me. For starters, the synopsis that is on the back of the book is NOTHING about what this story is about. I'm not spoiling anything by saying this but that synopsis pretty much ties itself up in the first quarter of the book. I'm not kidding. It's over and is never brought up again for the rest of the book. This I felt to be very misleading as I thought that was going to be main conflict of the book and it was over before it barely began! The storyline is also very predictable and I could see things happening long before they actually came true. The characters are rather cookie cutter and not a lot happens with them to make them grow and change.

I also felt this book to be extremely preachy. Now with Christian fiction I can expect there to be some talk about God and being saved to a point in the book. This book however, pretty much was just filled with it. I'm sorry but I would not want to give this book to someone who wasn't a Christian because I think they would either get confused by all the lingo or annoyed at being preached at constantly. It's one thing to see how having strong faith influences a character but it's quite a different matter for it to get thrown in your face on every page. Also there is a character that is a recovering alcoholic and gets over his alcoholism simply by praying. While this can be part of the recovery process, it is very unrealistic for it to be the only way, and also especially after just one time of going cold turkey.

Now there were things I did find interesting about the story. SIDS is brought up and even though they didn't know much about it during the time period, it is still interesting at how it is handled. Also I found it quite interesting that the 1906 San Francisco Earthquake is mentioned and talked about even though most of the story takes place in Alaska. I liked the historical aspect of that as it made the book more historical at that point instead of being just a historical romance.

However, it's not enough to save the book, and sadly I cannot recommend it. The first book in the series I did enjoy. I will have to go back and read the second book to catch up on what I missed. I'm hoping that future books by Peterson will find more favor with me.

Twilight's Serenade by Tracie Peterson is published by Bethany House (2010)