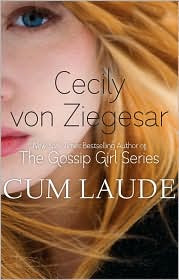 Dexter College is a small liberal arts college in the quiet town of Home, Maine. But it won't stay quiet for long with this group of freshmen. There's Shipley—blonde and beautiful, the object of envy and more than a little lust. Determined to assert herself and to shed her good-girl image, she buys cigarettes and condoms, because that's what every self-respecting college girl does. Her edgy roommate, Eliza, came to Dexter to get noticed, and she has the attitude and the mouth to prove it. Then there's Tom. Handsome, privileged, used to getting his own way, he's a jock-turned-artist who thinks his paintings will change the world. Sensitive Nick, Tom's wake-and-bake pot-smoking roommate, wants to follow in the footsteps of his boarding-school hero. And then there are brother and sister Adam and Tragedy Gatz. The freckle-faced farm boy lives at home with his parents and his little sister, who does all she can to stop him from being a wuss.

As Shipley, Eliza, Tom, Nick, and Adam find out, that first year of college is more than credits and cramming. Between the lust and the love, the secrecy and the scandal, they'll all receive an unexpected education. It's a time of shifting alliances, unrequited crushes, and coming of age. Find Yourself is Dexter's motto. And they are determined to do just that.

I'm a big Gossip Girl and the It Girl fan. When I went to BEA in May, one of the authors I was thrilled to see on the author signing list was Cecily Von Ziegesar. I was extremely excited when I was able to be 5th in line to meet her. I was geeked when I finally got the table and was able to actually have a mini conversation with her and give her my business card. I was so looking forward to reading this new book of hers.

Right before I first started reading, I went to look at other reviews to see what everyone else thought of the book. I was alarmed to see so many negative reviews but I didn't let that taint my reading experience. I knew this wasn't going to be the next literary classic but was prepared for some light chick lit escapism. However when I finished reading, I was quite glad that I had looked beforehand. Otherwise I would have thought I was the only weird person in the world that really did not like this book.

Right from the beginning of the book, I began to roll my eyes. First off there are some pretty ridiculous first names in this book. I mean really...Shipley and Tragedy? Second, the whole college experience portrayed in this book had pretty much every single stereotype thrown in for good measure. I didn't know a single person my freshman year of college who came to school with only one bag to last them the entire year. No food? No furniture? Just one change of clothes? I guess I can understand the lack of parents not helping but it's sad that they weren't involved at all. Also the whole drinking AS SOON as you move in bit is not true at all.

One huge discrepancy throughout the book is that it is supposed to take place in 1992. There are many references to Clinton/Gore sprinkled throughout the story, almost as if they are the new answer to bringing back the Kennedy era. However there are many details that seem as if the story takes place in the present time. One example is the fact that there is a Starbucks on the college campus. I don't know why in 1992 there would be a Starbucks on a tiny college campus in Maine?

I was just very disappointed in this book. It was nothing more than a Gossip Girl book with different character names. I mean really: Shipley = Serena, Eliza = Vanessa, Tom = Chuck, Nick = Nate, Adam = Dan, Tragedy = Jenny. Honestly, they acted JUST like each other. It was quite disgusting to see Tom's parents blatantly ignore the fact that their son has a drug problem. I mean he was right there in their face, high as a kite and doing things that are just not normal if you are completely sober and they choose not to acknowledge this. Also, (and this is a pretty big spoiler), I was disgusted at the fact that Shipley chose to remain with him in the end even though she knows he will be bad for her. I would not consider this book to even be an "adult book" as the characters are all barely 18 years old.

I'm really sad that I didn't like this book. I think Von Ziegesar needs to move away from writing books that are like Gossip Girl. The formula may have worked for that series but it's time to step away and start afresh. I'm hoping that this book is NOT the first book of a new series and that her next book will be a lot better.

This review copy was provided by the author at BEA 2010