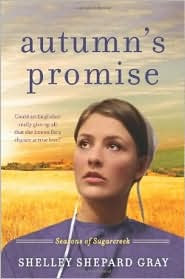 Until Robert Miller met Lilly Allen, his world had been dark. A widower after only two years of marriage, he'd been living in a haze, feeling that, at twenty-four, his life was already over. But thanks to his friendship with Lilly, he now has new reasons to wake up each day. He knows his connection to her doesn't make sense. She's only nineteen, with a past the whole town talks about. Even more, she's not Amish, like Robert. A marriage between the two of them could never happen.

Lilly's heart is drawn to Robert, not to his faith. No matter how much she admires his quiet strength and dependability, she doesn't think she could ever give up her independence and reliance on the modern world. Is their love doomed before it even begins?

It's time to return one more time to the folks at Sugarcreek and this time the main focus of the story is on Lily Allen. She was the pregnant teenager who had minor plot lines in previous books and now the attention is focused on her. Lily has always been one of my favorite characters throughout the series because she is outspoken and very independent. That is one of the reasons why Robert falls for her. Their relationship was very interesting to read. It wasn't like any other Amish/English relationship in other books. They had a LOT of chemistry together. My favorite scene happened when Lily is taking Robert's order at the restaurant and asks him what he wants and all he says is "You." *Swoon!* And that is coming from a normally reserved Amish guy!

There's sort of a Romeo/Juliet scenario that happens with how both families don't want to encourage the relationship. Robert's side condemns Lily for having been pregnant and the fact that she would never fit in the Amish where Lily's family is worried that she will never be able to fit in. However the pair ignore the naysayers and continue their relationship even though they know that sooner or later, they will have to face reality and make a decision.

The story also deals with Caleb, an Amish teenager who is struggling with what he wants to do in life. He doesn't know whether he wants to stay Amish or join the outside world. Unfortunately for him, at first all his experiences with the English world are not so good, as the teens he hang around with drink and smoke among other bad habits. He's also afraid of telling his parents his feelings because he's worried at how they would react to the confusion he's facing. While probably not intended at all, this is the probably the closest scenario I can see to how a LGBT teenager in the Amish world would feel.

I was SO happy with the ending of the book. Seriously, if you have ever read any of my other reviews on Amish fiction, you know that one of my biggest complaints is how someone from the outside world will join the Amish to be with the person they love. And I hate that because it RARELY ever happens in real life. That is why I loved the ending of this book because it didn't happen!

And this is why Shelley Shepard Gray is my favorite Amish author. I love her books because they are realistic, non preachy, and she allows the characters to act as they are without forcing them to change their personalities. The Amish are allowed simply to be Amish and those from the outside are allowed to stay as they are. The two sides mix together because they are neighbors but there is never any pressure to give up who you really are unless you truly want to. Even then, it's ok to backtrack on your decision.

If you don't read Amish fiction, you probably won't understand my happiness over the ending of this book. However, if you do read Amish fiction and share my feelings, I think you will understand. I love Gray's books and I will continue to read more of hers because I love her style of writing. Even though the subject matter is one I have issues with, she handles them in a way that makes me enjoy reading her books and always wanting more.