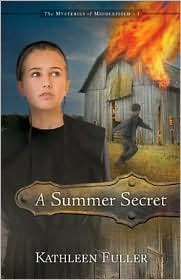 With a twin brother and five younger brothers, Mary Beth Mullet's house is in constant chaos. Her parents don't seem to mind the noise, but she needs a break from all the pestering and babysitting. It's the summer before eighth grade, and Mary Beth plans to escape to her secret place as much as possible. The old barn in the neighboring field is dangerous, and her parents have forbidden her to go there, but she escapes to it as often as she can. Mary Beth soon discovers she is not alone in the barn. Someone is living there; someone who needs help. Can Mary Beth help the stranger without losing her secret place? And what if the barn is as dangerous as her parents say it is?

Well it appears that Amish fiction has begun to seep into the young adult fiction world. You can't seem to escape the draw of the bonnet..it follows you everywhere. While I have enjoyed Kathleen Fuller's books in the past, I'm not quite sure I really enjoyed this story. I felt while reading the book that the audience for the book kept shifting. At times, it seemed like the story was aimed at a young adult audience. Then the story would shift to focus on middle grade readers. And then, I felt there was instances that only adult readers would understand. Without spoiling the story, I just felt that the book was very tame for a middle grade/young adult book. It seemed to want to talk about following the Golden Rule and that if you went against it, life would not be good for you. I didn't feel as if I could relate to the characters at all. I know that I am not the target audience, but even if I had been, due to the characters being so strictly Amish there is nothing for the younger audience to relate to. Mary Beth and her brothers are very sheltered so they know almost nothing of the "outside world".

I also didn't really feel as if there was a mystery at all in the story. There were sections where the reader didn't get the whole story and these elements were revealed later but I was very disappointed that there was nothing that resembled any other mystery story I had read. Overall, I would have to say this book was just an okay read. If you are looking for something clean for your kids or young teens to read, then this book is good for them. If they are interested in learning about the Amish, this is a good starting place. I just didn't feel the book to be up to par with Fuller's adult works. Hopefully by the next book, there will be more character development as well as characters that are more easy to relate to.

This review copy is provided by the publisher