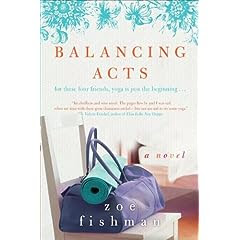 Charlie seemed to have it all—beauty, brains and a high-paying Wall Street job far away from her simple Midwest upbringing. Then, in the middle of her “quarter life crisis,” she decides that the banker’s life isn’t what she wanted after all, quits her job and opens her own yoga studio in Brooklyn. But like any new business, finding customers is an uphill battle. When she hears about her college’s 10 year reunion, she straps on her best salesman smile and invades midtown—determined to drum up some business.

Unexpectedly, she reconnects with three college classmates—women who, like Charlie, haven’t ended up quite where they wanted to in life. Sabine, a romance book editor, still longs to write the novel brewing inside of her. Naomi, a child of the Upper East Side, was an up-and-coming photographer and social darling, but now is a single mom who hasn’t picked up her camera in years. Bess, a California girl trying to make it in New York, dreams of being the next Christiane Amanpour, but instead finds herself writing snarky captions for a gossip mag, which is neither satisfying nor rewarding. When Charlie, who has her own past to contend with, signs them up for a weekly beginner’s yoga class, they become all too aware of the lack of balance in their lives. Each has to dig deep and fight their inner demons to reconnect with what they truly want out of life.

I'm not a yoga person. Believe me I've tried. I've just never gotten into the craze and to be honest I'm not very flexible. Still, I was drawn to this book because I love stories about friendship. And this book definitely did not disappoint. Even if you're clueless about yoga like me, it's absolutely possible to really enjoy this book. The writing is refreshing and relaxing almost as if you have done a session of yoga yourself.

I read this book after a recent first time trip to New York City and I was very excited to read about the city as this was the first book I had read that took place in NYC since my trip. Even though I didn't recognize any of the places, the story takes place in Brooklyn which is where I stayed for my trip as well as mention of the subway. This might be old news for folks who are New Yorkers or have been there several times but for me it was very exciting that I could finally relate to what everyone was talking about.

All four of the characters were easy to relate to and I found myself liking all of them. Naomi's character was probably my favorite as I felt her story involving her son, her ex and her medical issues, to be very in depth and yet engaging to read. Bess, while annoying me at bit at first, soon grew on me as she struggles to find her identity between her life in NYC and with her boyfriend. I really liked her visit with her parents as it helped her to discover where she belonged. Charlie's story didn't really stand out to me as the other three did but I really liked how her story is the anti Sex and the City. She was very brave to go after what she felt her heart wanted as opposed to staying in a job that was financially secure. Sabine's story had be cracking up. I loved her reactions with Subway guy because that's probably who I would have acted myself and I found myself laughing over the situation. I was very worried for a bit that the Sabine/Zach storyline was going to end up like an episode of Sex and the City where the good guy gets dumped for a jerk. I won't spoil the ending but I'll say I was VERY satisfied when my assumptions turned out wrong.

I really loved how the stories blended together yet each character was given her own separate story. The writing in the book flows very nicely and I was immediately drawn into the story. I wouldn't say this book is chick lit although it can read like one. More so, it's a book about women and friendships and how life may not turn out the way you had intended but it still works out for the best. I liked how even though not everyone has a conclusion that is entirely happy, it is where they accept their lives to be for the time period. This is Fishman's debut novel and it's a winner. I cannot wait to read her next book no matter what the subject as long as she keeps writing like this. VERY HIGHLY recommended. Namaste.

Balancing Acts by Zoe Fishman is published by Harper Paperbacks (2010)