Book Review: "Before I Fall" by Lauren Oliver 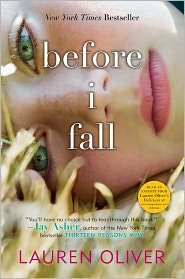 What if you had only one day to live? What would you do? Who would you kiss? And how far would you go to save your own life?

Samantha Kingston has it all: the world’s most crush-worthy boyfriend, three amazing best friends, and first pick of everything at Thomas Jefferson High, from the best table in the cafeteria to the choicest parking spot. Friday, February 12 should be just another day in her charmed life.

Instead, it turns out to be her last.

Fortunately, she gets a second chance. Seven chances, in fact. Reliving her last day during one miraculous week, she will untangle the mystery surrounding her death—and discover the true value of everything she is in danger of losing.

Don't let the size of this book hinder you from reading it. Yes it's almost a 500 page book but believe me it's a page turner and you won't want to stop reading. There's a lot that goes on this book and it can be a bit confusing at first as to where it's all heading but once you get sucked into the story, you don't want to get out of it. I didn't like Samantha or her friends at first. They are the Mean Girls of their school, the popular girls who get what they want and everyone pretty much has to worship them. They don't care what who they hurt as long as they get what they want. Then at a party, everything changes.

I was wondering at first that this book would be a teen girl's version of Groundhog's Day where the same day would get relived over and over again until the very end when she would finally snap out of it. As it stood, from the first day I wasn't sure what was going to happen during the consecutive days that followed. While the same day does repeat itself, it was very refreshing not to keep reading the exact same events over and over again. Samantha was able to figure out pretty quick that she would be able to change things and make each day different. My favorite day was the day she spent with her family. It was just very sweet to read and you could tell that it meant a lot to both Samantha and her family to have her spend the entire day with them. Maybe for teens that read this book will take a lesson out of that and realize that no matter how much your friends and popularity mean to you at the moment, family is what should always come first. By the last day, I was pretty much in near tears as Samantha has realized what she has to do to make things right and the cost of her sacrifice.

There are lots of side stories that are just as interesting as well. The whole Valentine's Day Flower thing was something I dreaded in high school because I never got any flowers except maybe one or two from friends. Also the situation with the teacher was a bit disturbing because it seems that I've been reading lately more of teacher/student relationships in YA books. I hope this isn't a fad that isn't going to continue. I understand why Samantha did it in the book and that eventually she learned from it. While this is a book that is aimed at the young adult audience, I would recommend this more towards older teens as the book deals with issues of suicide, losing one's virginity and teen drinking.

This book has the best of both worlds. There is the fluff of a regular teen chick lit novel but there's also a heavy serious message woven through the story. It's a deep read that is both captivating and haunting at the same time. The author is the same age as me and I'm in awe that she's created a story that sticks me with me long after I finished reading. I really enjoyed reading this book and I look forward to anything else written by her. HIGHLY recommended.

Before I Fall by Lauren Oliver is published HarperTeen (2010)