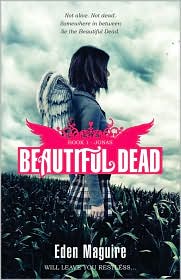 Something strange is happening at Ellerton High. Phoenix is the fourth teenager to die within a year. His street-fight stabbing follows the deaths of Jonas, Summer, and Arizona in equally strange and sudden circumstances. Rumors of ghosts and strange happenings rip through the small community as it comes to terms with shock and loss.

Darina, Phoenix's grief-stricken girlfriend, is on the verge. She can't escape her intense heartache or the impossible apparitions of those that are meant to be dead. And all the while the sound of beating wings echos inside her head...

And then one day Phoenix appears to Darina. He tells her that she must help Jonas-the first of the four to die-right the wrong linked to his death. Only with her help can Jonas finally rest in peace. Will love conquer death? And if it does, can Darina set it free?

This book was a total surprise to me. To be honest, I really had no idea what to expect when I started this book. This was a new author and a new publisher to me, so I was going into this book completely blind. When I finished reading, I was really glad that I had picked up this book and immediately raved about it.

The storyline is really believable surprisingly even with the supernatural elements. Any questions I had about the undead is pretty much answered in the book even the ones that I thought no one else would care about. I could buy Darina and Phoenix's relationship even if they had been only dating for a short time before his death. Her friendship with Zoey was one storyline I really was interested in. I really liked reading how the two girls who had grown apart were able to come back together and make peace.

What's great about the book is even with the zombies and the paranormal element running throughout the book, there is also a really good mystery in the story. I actually got so into finding out what really happened to Jonas that I had to will myself NOT to look at the ending to see what happened. This is really rare for me because if the story is not written well or is too unbelievable I usually flip to the end because I just can't stand it anymore. This time, I really got into the story so I wanted it to play out as I read it and see if I was right.

I really enjoyed reading this book. Even though this book is in a genre I normally don't read, I didn't feel alienated or put off at all by this book. I just don't want to hear that this book did for zombies what Twilight did for vampires. Because even though it's a wonderful book, it's NOT anything like Twilight so comparisons to it would just fall flat. The writing really captures your attention and draws you in throughout the whole story. As soon as I finished, I was eager to read the next book in the series. Honestly I can't wait to read more of this series and see what's going to happen to Darina, Phoenix and the rest of the gang. Even if you don't like any sort of paranormal fiction at all, I really think that you will enjoy this book.