Book Review: "Worth a Thousand Words" by Stacy Hawkins Adams 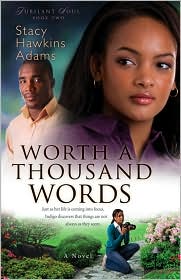 Life has always gone Indigo Burns's way. She's smart, pretty, and talented, and she knows exactly what she wants. A photography internship at her hometown's local newspaper is the next step in her well-laid plans for her future. But her long-term goals are put to the test when her boyfriend Brian proposes--two years before he's supposed to and in front of all the guests at her college graduation party. Too concerned about his feelings to say no, she heartily agrees, but inside she's cringing. Indigo knows in her heart that she's not prepared to sacrifice her dreams to become Brian's wife--not before she has achieved any of them. Will she find the answers among family and friends in Jubilant, Texas? Or will the picture-perfect life she dreams of be left behind?
This book really surprised me. I was expecting one thing and then got blown away by another. The characters in this book really get to your heart. I really liked Indigo and her strong character. It was really nice to see her grown up from the previous book and wanting to follow her dreams as a photographer. Many different things happen to her in this book, challenging her strength and emotions. She acted much better than I would, had I been in her situation. Along with Indigo, I was also curious as to why Brian wanted to get married so fast and seemed to ignore Indigo's desire to go to graduate school. My first impression was that he was being chauvinist and old fashioned. I was afraid that Indigo would fall into the same rut that many females in Christian fiction seem to take when they give up their career plans to become a stay at home wife. Therefore it was a huge surprise to find out the real reason for the plans for a quickie wedding. What's funny is that I never expecting Bryan to admit what he had done in the past. I've always thought how it would be interesting if that subject matter was brought up in a Christian fiction book but figured it was too edgy. Therefore it was with great surprise that not only was it brought up, it was a major storyline AND did not involve a neat and tidy ending. Another small but interesting issue that was brought up was interracial dating. It's not as a big of a plot, but it does break barriers in Christian fiction by the fact it was even brought up at all.

This series has totally just blown me away by bringing up topics most authors would avoid to fend off controversy. Stacy Adams has now captured my full attention and I've become a new fan. I'm eagerly awaiting the next book in this series. HIGHLY recommended.