Book Review: "Hollywood is Like High School With Money" by Zoey Dean 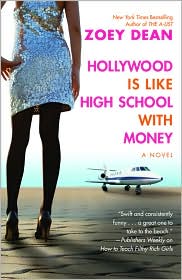 Twenty-four-year old Taylor Henning has just landed her dream job as an assistant at a major movie studio. But when her catty coworkers trick her into almost getting fired, she realizes that the old saying "Hollywood is like school with money" just may be true. The thing is, Taylor wasn't exactly a social butterfly in high school-how is she supposed to do any better the second time around?

That's when she meets her boss's popular sixteen-year-old daughter Quinn, and has an epiphany: maybe this teenager can teach her how to use her queen bee tactics to succeed in the Hollywood popularity contest. Quinn comes up with a plan to teach Taylor one lesson a week-everything from "Fake it 'til you make it" to "It's *never* your fault"--and soon Taylor finds herself winning the war against rival assistant Kylie. Until, that is, she's directed to steal Kylie's boyfriend, and something happens that's not in the game plan: Taylor falls for the guy. Now she must do the impossible-- harness her inner mean girl while staying true to herself.

I don't know about you but I would hate to have to go through high school again. All the cliques and having to worry about trying to see if you could become popular makes me shudder to even think about it. That's why I could never even think of applying for a job like Taylor. It's sad to say that I probably wouldn't last very long. What I really liked about Taylor is that even though she works in Hollywood, and has the untimely job of being a second assistant, she's not ditzy. She's really quite smart and knows about the actual movie industry even though she's not too knowledgeable about the hierarchy about moving up. I really liked learning about scripts and background knowledge myself. It makes the movie industry become more real when you know this stuff and not just like some magical wonderland. Taylor is also realistic and relatable. This book does not having annoying slang thrown around by characters and there's not really that much name or label dropping.

It's funny seeing her battle wits with Kylie with each trying to outdo and slam down the other. Although Quinn appears to be of help to Taylor, it's also a testament to the lack of parenting that goes on in the industry. I'm really not a fan of how teens can do all these things, ruin people's lives and then get completely away with it. The only qualm is that this is a storyline that has been done numerous times. Almost every chick flick that takes place in a magazine setting has done this plot. Therefore you know exactly what's going to happen. However the story is so engaging and the plot is witty and funny that it really doesn't matter and you get sucked up into the the lives of the characters.

If you are looking for a great book to bring to the beach this is it. It's a fun read that totally helps you to escape from the normal routines of daily life and brings you to the glamorous world of the rich, famous, and beautiful. I wish this book was part of a series because I would love to learn more about Taylor's life and the world of Hollywood cliques. HIGHLY recommended.