Book Review and Giveaway: "The Justice Game" by Randy Singer 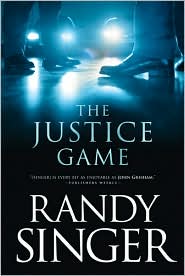 After the target of an investigative report storms a Virginia Beach news studio, he executes one of the anchors on live television before the SWAT team is able to take him down. Following the victims funeral, her family files a lawsuit against the gun company who manufactured the killers weapon of choice.

The lawyers for the plaintiff and defendant Kelly Starling and Jason Noble are young, charismatic, and highly successful. They're also easy blackmail targets, each harboring a personal secret so devastating it could destroy their careers.

Millions of dollars and more than a few lives are at stake. But as Kelly and Jason battle each other, they discover that the real fight is with unseen forces intent on controlling them both.

This book was probably one of the most interesting law suspense novels I've ever read. It's a book that really makes you think about why you believe in certain things and how you came to have that viewpoint. In our country, the debate about gun control is highly controversial and is always a major topic during political elections. When one hears about a shooting, it's always easy to want to place the blame on someone. The immediate need is to bring someone and have justice done to make they pay for what has happened. In this case the widower of the murdered newscaster wants to bring down the gun manufacturer. The two young lawyers in this book have to face the hard questions being thrown at them about who is really at fault and who should take the ultimate blame. I really found the mock jury trials and selections very interesting. It makes one think about how controlled our judicial system really is and what goes on behind closed doors. It's also very scary to think about how lawyers can be manipulated by outside forces which can throw off an entire case. Since I'm from the Hampton Roads area, it was nice seeing a book set in Virginia Beach. It's always fun to see a book set in a location that I'm very familiar with and you can point out the places that really do exist. For example, The Purple Cow really does exist!

I felt that the ending seemed a bit rushed. I just felt that there was a lot of buildup in the entire book and the finale seemed a tad flat. I know however that readers chose this ending after watching video clips, so I'm not sure what to make out of that. However, my only true qualm was that Lisa was not the only victim of the fatal shooting, yet I didn't seem to recall any other family members of the other victims as part of this trial. This just struck me as very odd that no one else seemed to care except for her husband.

This was my first book by Randy Singer that I've read and I thoroughly enjoyed it. This book is on par with other law thrillers such as those by John Grisham. In fact, this book reminded me of "Runaway Jury" with it's premise, just minus the strong language. I'm looking forward to going back and reading the rest of Singer's books and will be on the lookout for his new ones.

The Justice Game by Randy Singer is published by Tyndale (2009)

I'm giving away a brand new copy of today's book! Leave a comment with your email address so I can contact you if you win. I'll pick a name and announce the winner on Monday, August 3. US addresses only . Good luck!