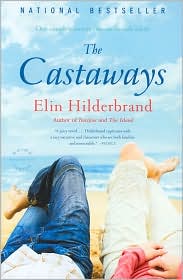 Greg and Tess MacAvoy are one of four prominent couples who count each other as best friends. As pillars of their close-knit community, the MacAvoys, Kapenashes, Drakes, and Wheelers are important to their friends and neighbors, and especially to each other. But just before the beginning of another idyllic summer, Greg and Tess are killed when their boat capsizes during an anniversary sail. As the warm weather approaches and the island mourns their loss, nothing can prepare the MacAvoy's closest friends for what will be revealed.

Have you ever read a book where you're having trouble reading yet you keep trudging through hoping that the ending will make up for the rest of the story? This was such that book for me. This was the first book of Elin Hilderbrand's that I have read and unfortunately I just could not get into the book. I guess I had been expecting a beach read about a group of friends who were reminiscing about old times at the beach, sorta like The Big Chill.

Instead, it just felt like one huge soap opera from the get go. Everyone's having affairs with everyone. It was like you couldn't turn your head without someone passing off longing glances and secret looks at someone else's spouse. It's one thing to have drama in a book to create tension. It's another when the entire book is just one big drama between a bunch of grown ups who seemingly never grew up. Half the time I just wanted to take a character and shake them and tell them to snap out of their misery and self wallowing. Honestly, most of the drama that was created for the book could have been resolved almost instantly. It really bugs me when people marry and don't love each other from the get go.

There were only a few redeeming aspects of the book. The intrigue of the mystery of what happened to Greg and Tess was pretty much the only thing that kept me reading the book. Also the character of the Chief was the only person I actually liked and felt for in the story. He is the only one that seems to be rather sane and actually could be pitied. Everyone else in the book seemed to have a sob story that they kept milking.

I feel bad for not liking this book because it seems that everyone that's read it has enjoyed it. I suppose it is good escape reading and the setting of the book is appealing for a summer beach read. I just could not get into the story and never felt connected with the characters. Unfortunately I don't think I will be reading any more books by the author if they are all like this one.