Book Review: "So Over My Head" by Jenny B. Jones 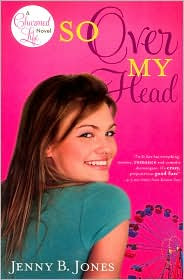 When the Fritz Family Carnival makes its annual appearance in Truman, Bella's keen reporter instincts tell her the bright lights hide more than they reveal. Her suspicions are confirmed when one of the stars is murdered. Though the police make an immediate arrest, Bella doubts this case is quite that simple.

She needs her crime-solving boyfriend, Luke, more than ever. Problem is, his ex-girlfriend has moved back to town, giving Bella some murderous thoughts of her own. Then again, there's no time for a relationship crisis when Bella's doing her best to derail her father's wedding and stay one step ahead of a killer.

Is God sending her a message in all of this madness? With a murderer on the loose and her boyfriend's ex on the prowl, this undercover clown has never had more to juggle--or more to risk.

Who would have though that a YA series could feature a former socialite, a WWE type wrestler who used to work in a ladies' pad factory and a small town carnival all in the same book and have it all make sense? Well what do you think Jenny B. Jones' job is as an author? She skillfully manages to work all these mismatched things together into one of the funniest and most entertaining YA novels I've read all year.

What I love about these books is that even with their fluffy looking covers, they give more meat than the average YA-lit read. First off, they're rather thick for YA at a little over 300 pages. Now you might think that is too much but once you start reading, you want the book to keep getting longer. Second, the book is a combination of contemporary YA, mystery and humor all blended together. Seriously this book cracked me up. There are several one line zingers from Bella and her friend Ruthie that had be howling. Plus there is also reference to Prince Harry, the most absolute gorgeous royal ever. It's like Jones went inside my head to get everything I wanted and put it in a book.

The main part of this story focuses on the mysterious death of the bearded lady that happened while Bella was visiting the carnival that came through town. There are suspicious folk everywhere and she finds herself once again on the case. The mystery is quite good, suspenseful at times with red herrings everywhere. I actually wasn't quite sure of who was the killer until the end. Plus Bella gets to work as a clown which means I have to avoid her as I am afraid of all clowns.

I will be honest, even though the carnival plot was very interesting, there were times when I wanted the story to keep going back to Bella's dad. That's a storyline I have been following since book one and I was just waiting for him to finally realize what was going on. And believe me, if you've been annoyed with how he's been treating Bella or how Christina seems to have something suspicious going on, you will be more than satisfied.

While this is the third book in the Charmed Life series, the story can be read as a standalone. Of course you will get the full perspective of the situation by reading the previous books but there is enough in this book for it to be read by itself. Jones is one of my absolute favorite YA authors, Christian or general market. She knows how to write for the YA audience because she knows the YA audience. She is one of those authors that I recommend to everyone to read. I cannot get enough of her books and want her next book NOW! VERY HIGHLY recommended.

So Over My Head by Jenny B. Jones is published by Thomas Nelson (2010)

This review copy was provided by the author