For several years, Lena worked on the support staff of a church, but in November of 2002, God changed things so that she could stay home and write full-time. It has been the desire of her heart for a long time. In Proverbs 37:4, it says, “Delight yourself in the LORD and he will give you the desires of your heart.” She believes that this blessing is a result of her delighting herself in Him, and she praises Him for the opportunity.

She have been a professional writer with a free-lance writing and editing business since 1984. In that time, she has written curriculum for public schools, private schools, and three different denominations. For one company, I managed a writing team that produced a two-year American History course for at-risk students. One of her clients was a Christian comedian for whom she wrote several routines. An airline training company had her edit and design International business reports for them.

Her first novel was published by Heartsong Presents in 1992. Since then Lena Nelson Dooley has written more than 25 works of fiction and nonfiction.

Lena has been married to her husband James since 1964. Theirs was one of those love-at-first-sight relationships. They were married three months and three days after they met. He truly was God’s gift to her. They are absolute opposites, but that means that his strengths are her weaknesses, and her strengths are his weaknesses. Together they make a more perfect whole. She believe that is what God intends for all of us.

They have two daughters. Marilyn Van Zant is married to Roger, and they have a son named Timothy. Tim is now in Tennessee at Ft. Campbell. His son Sebastian is almost 2 years old. Jennifer Waldron is married to Eric, and they have three children—Austin, Marissa, and Amanda. James and Lena love to spend time with their family, and they are blessed that both families live in the Dallas-Ft. Worth Metroplex, so they see them often. 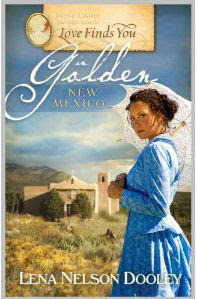 All that glitters is not gold. It’s 1890, and Golden, New Mexico, is a booming mining town where men far outnumber women. So when an old wealthy miner named Philip Smith finds himself in need of a nursemaid, he places an ad for a mail-order bride—despite the protests of his friend Jeremiah.

Hoping to escape a perilous situation back East, young Madeleine Mercer answers the ad and arrives in town under a cloud of suspicion. But just as she begins to win over Philip—and Jeremiah himself—the secrets she left behind threaten to follow her to Golden...and tarnish her character beyond redemption.

If you would like to read the first chapter of Love Finds You In Golden, New Mexico, go HERE.

"Love Finds You In Golden, New Mexico is a well-researched novel brimming With emotive conflict. Lena Nelson Dooley has crafted a historical romance that demonstrates that courage comes in many forms, but the courage to love is the most difficult of all.”

─DiAnn Mills, author of Sworn to Protect and A Woman Called Sage

“Two strangers are presented with a ‘golden’ opportunity for love in this quintessential East meets West tale by well-loved author Lena Nelson Dooley. I found myself swept away by the beautiful writing and enmeshed in the lives of the players, who face many twists and turns in their journey toward the ultimate happily-ever-after. Love Finds You in Golden, New Mexico is truly one of the loveliest historical romances I’ve read in ages. Highly recommended.”

─Janice Hanna Thompson, author of Love Me Tender and Swinging on a Star