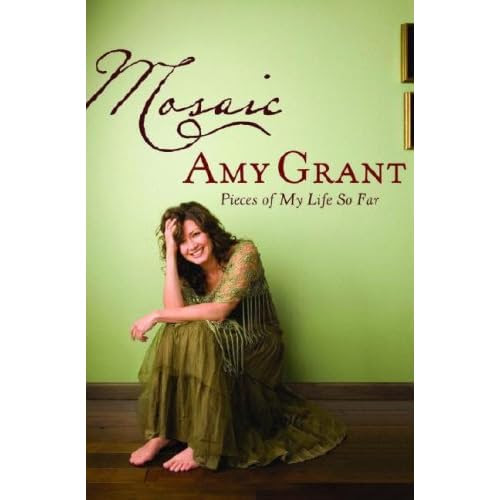 I'm giving away 3 brand new copies of today's book! Leave a comment with your email address so I can contact you if you win. I'll pick 3 names and announce the winners on Monday, October 22. Good luck!

Grammy Award–winning artist Amy Grant has lived in the spotlight since bursting onto the Christian music scene as a teenager thirty years ago. In that time her work, marriage, and spiritual life have been subject to varying degrees of adulation and criticism.

Now, in her first autobiographical book, Grant bares her heart and soul, giving readers an intimate glimpse into her everyday life and the lessons she’s learning along the way. From lighthearted reminiscences of her Tennessee childhood to painfully honest reflections on the journey of faith, her vivid writing draws readers into her world while simultaneously creating space for them to rethink their own perspectives on life.

With honesty and depth, Grant offers poignant and often startling insights on motherhood, marriage, friendship, faith, loss, forgiveness, and redemption. Never-before-shared stories about her husband, country music star Vince Gill, provide a look into her life as a celebrity, while intimate portraits of her mother and musings on the past reveal the various pieces of a life blessed with jagged edges as well as vivid colors. Readers will find their preconceived notions of this music icon stripped away as they settle in for a warmly satisfying conversation with a gracious and wise friend.

Amy Grant is the best-selling Christian music artist of all time and the first to garner the number one spot on Billboard’s chart. Since beginning her career at age 17, she has earned six Grammy Awards and twenty-five Dove Awards, and last year she received her own star on the Hollywood Walk of Fame. Grant’s numerous television appearances include Oprah; Good Morning, ; and Late Night with David Letterman. In 2007 she’ll tour nationwide, performing with local symphonies in , City, and elsewhere.