Kristin Billerbeck was born in Redwood City, California. She went to San Jose State University and majored in Advertising, then worked at the Fairmont Hotel in PR, a small ad agency as an account exec, and then,
she was thrust into the exciting world of shopping mall marketing. She got married, had four kids, and started writing romance novels until she found her passion: Chick Lit. She is a CBA bestselling author and two-time winner of the ACFW Book of the Year. Featured in the New York Times and USA Today, Kristin has appeared on the Today Show for her pioneering role in Christian chick lit.

Her last three books were:

Split Ends: Sometimes the End is Really the Beginning (April 17, 2007)

Haley Cutler is the consummate trophy wife. Perhaps "was" is the more accurate term. Haley married Prince Charming when she was only twenty years old – back in the day when highlights came from an afternoon at the beach, not three hours in the salon.

When Jay first turned his eye to Haley, she was putty in his slender, graceful hands. No one ever treated her like she was important, and on the arm of Jay Cutler, she became someone people listened to and admired. Unfortunately, after seven years of marriage, her Prince Charming seems to belong to the Henry the XIII line of royalty. When Haley loses Jay, she not only loses her husband, she loses her identity.

With her first independent decision, Haley leaves LA and moves home to Northern California. Feeling freedom just within her grasp, Haley learns that her settlement payments must go through one of Jay's financial advisors, Hamilton Lowe. Haley believes he's nothing more than a spy. And the feelings of distrust are mutual. Yet somehow, Hamilton finds himself handing over the monthly checks in person, and Haley can't deny that there's a kind of tenderness and protectiveness in Hamilton that she's never experienced in a man before.

But before Haley can even consider another relationship, she must learn to accept her inherent worth, and what it is to be loved for who she is, not what's on the outside. 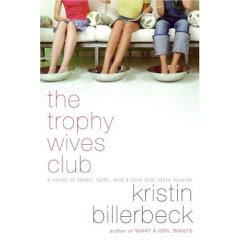 Used wife up for sale

Ok now this is a topic I never dreamed would make it in the Christian fiction world. Women actually admitting they married their husband not for love but for status? Talk about edgy subjects. Which is why I wanted to read this book. I love Kristin's books so this was another book I really enjoyed. Haley is a character that grows throughout the novel. She starts off being spoiled and slightly angry to wanting to learn more about faith. It's a great transformation. The writing is hip and fresh, sprinkled with pop culture yet not too much that the references will be outdated by next year. This is chick lit so I enjoyed reading about the name brand clothes and famous shoes and purses even though I will never own one in my life. I felt that the scene with Haley confronting Hamilton to be very crucial in this day and age. Why does the wife get blamed if the husband decides to leave her? And then why will society and the church shun her? I applaud this book for showing that just because someone has had a divorce does not mean they have completed the unforgivable sin. This is a book that will get your thinking juices flowing. If you only like reading stories where estranged marriages always end up having a happy ending....I'd look elsewhere. But if you are a chick lit fan who loves edgy material that normally isn't found in Christian fiction, this book is definitely for you. This is why when you think Christian chick lit you think Kristin Billerbeck.