Book Review: "The Mountains Bow Down" by Sibella Giorello 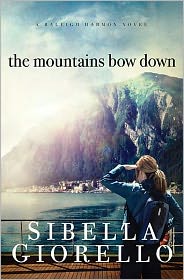 Summary from Christianbook.com: A cruise to Alaska sounds like the perfect vacation--it's a geologist's dream and will give Raleigh space to sort out her feelings about her recent engagement. But before the ship even reaches its first port, a case manages to find her. The producer of a movie that's being filmed on board goes missing and is then discovered hanging from the railing. Suicide seems to be the cause, but Raleigh quickly realizes the pieces don't add up. When the Seattle field office sends Jack Stephanson to assist her in the investigation, her personal uncertainty skyrockets. Why is it that she forgets to even call her fiance back in Virginia. And Jack seems to know her as well as she knows herself. She'll have to wait to sort out those feelings, though, because she and Jack only have five days before the cruise ends to solve this case.

I think this was the best book of the series. The mystery is well written and the killer is not revealed until the end with lots of twists and turns. Unlike previous books where I found the ending of the book to pale in comparison to the rest of the novel, this book kept me hooked to the story until the very end. I felt that this time, I really did care about who the murderer was and why they did what they did.

I really liked how the setting is confined onto a cruise ship. Except for brief stops at a morgue or a port, everything takes place on the ship. It's a very unique way to keep things centralized. Plus if you're on a cruise ship, you really can't hide for too long. Besides being the setting for the mystery, Giorello does also go into detail about life on the cruise ship for both the passenger and the workers. I found the behind the scenes details about what working on the ship to be very fascinating. Stories that take place on cruise ships always remind of Titanic and this one even included icebergs as well. The story also takes place in Alaska so it gives it another unique setting.

Raleigh's relationship with the troubled mother is given the full treatment in this book. It's quite sad at how Raleigh has to lie to her mother in order to really protect her from hurting herself. I got really annoyed with Claire's character. I honestly do not remember much about her from previous books but in this book I wanted to slap her so bad. I hope eventually she learns that faith does not come from rocks or auras because that girl has issues and a lack of common sense.

As with previous books in the series, I also really enjoyed the lack of romance in the story. Sometimes you don't need it at all or just a small smidge is more than enough. I did get a bit annoyed with Raleigh's character for how she treated her fiance throughout the book. I felt that he deserved better than what she was doing to him. Raleigh's character is very complicated, not because she's a pill, but because situations in her life keep pulling her in all sorts of different directions. I don't believe that this will be the last book in the series because there are still things that need to be tied up with Raleigh's character. I'll be looking forward to it!

Other books in the Raleigh Harmon series that I have reviewed: